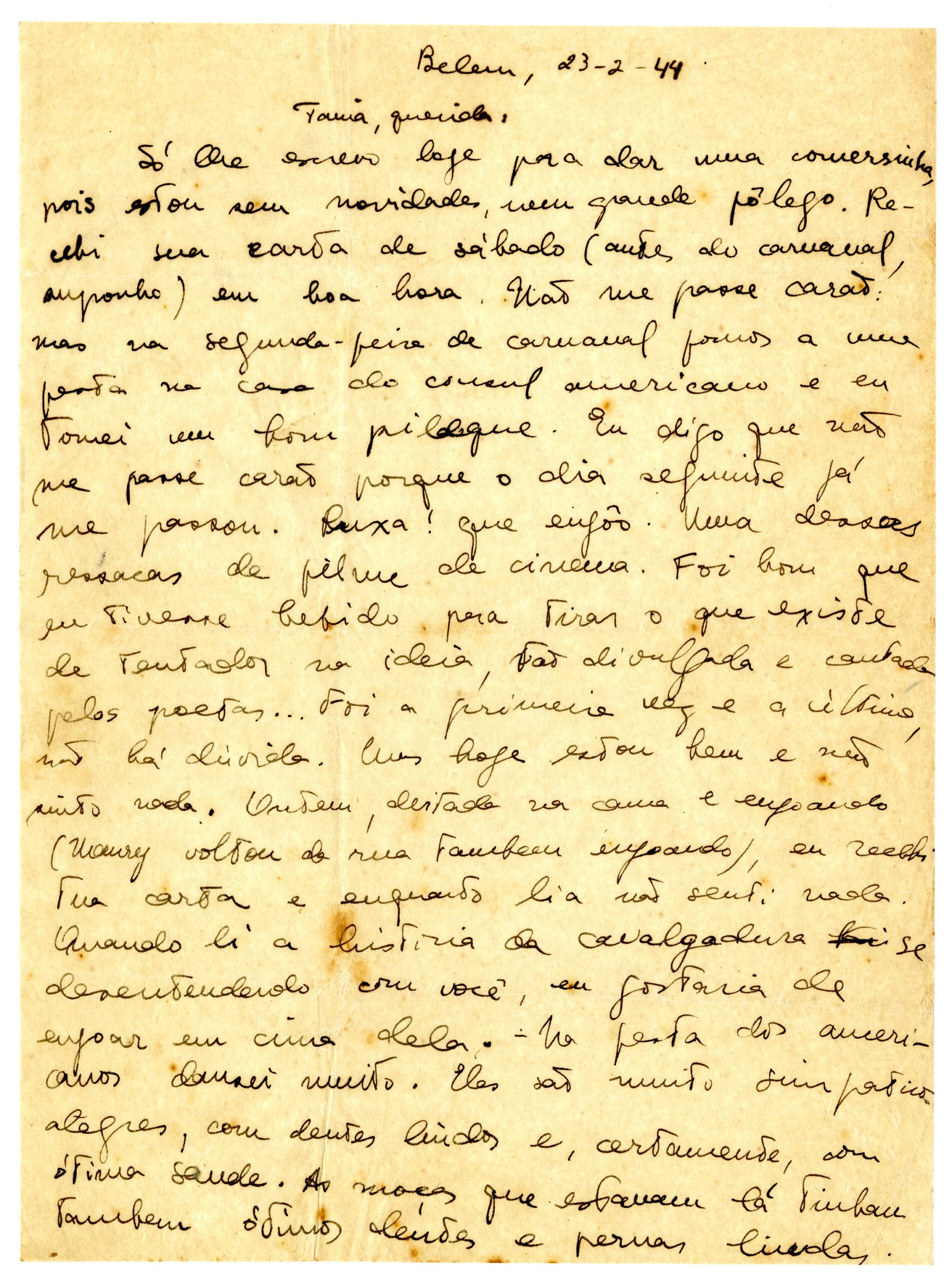 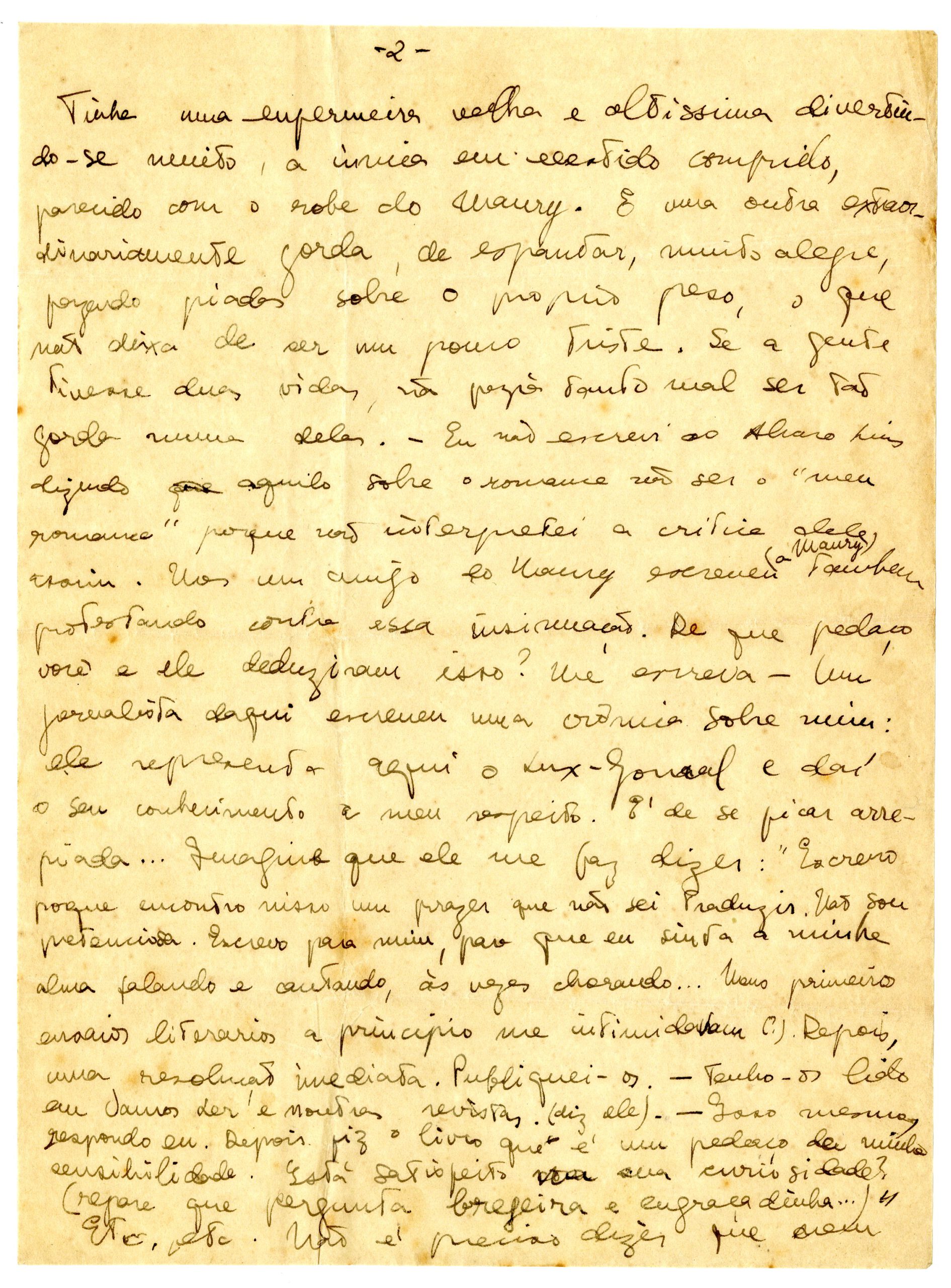 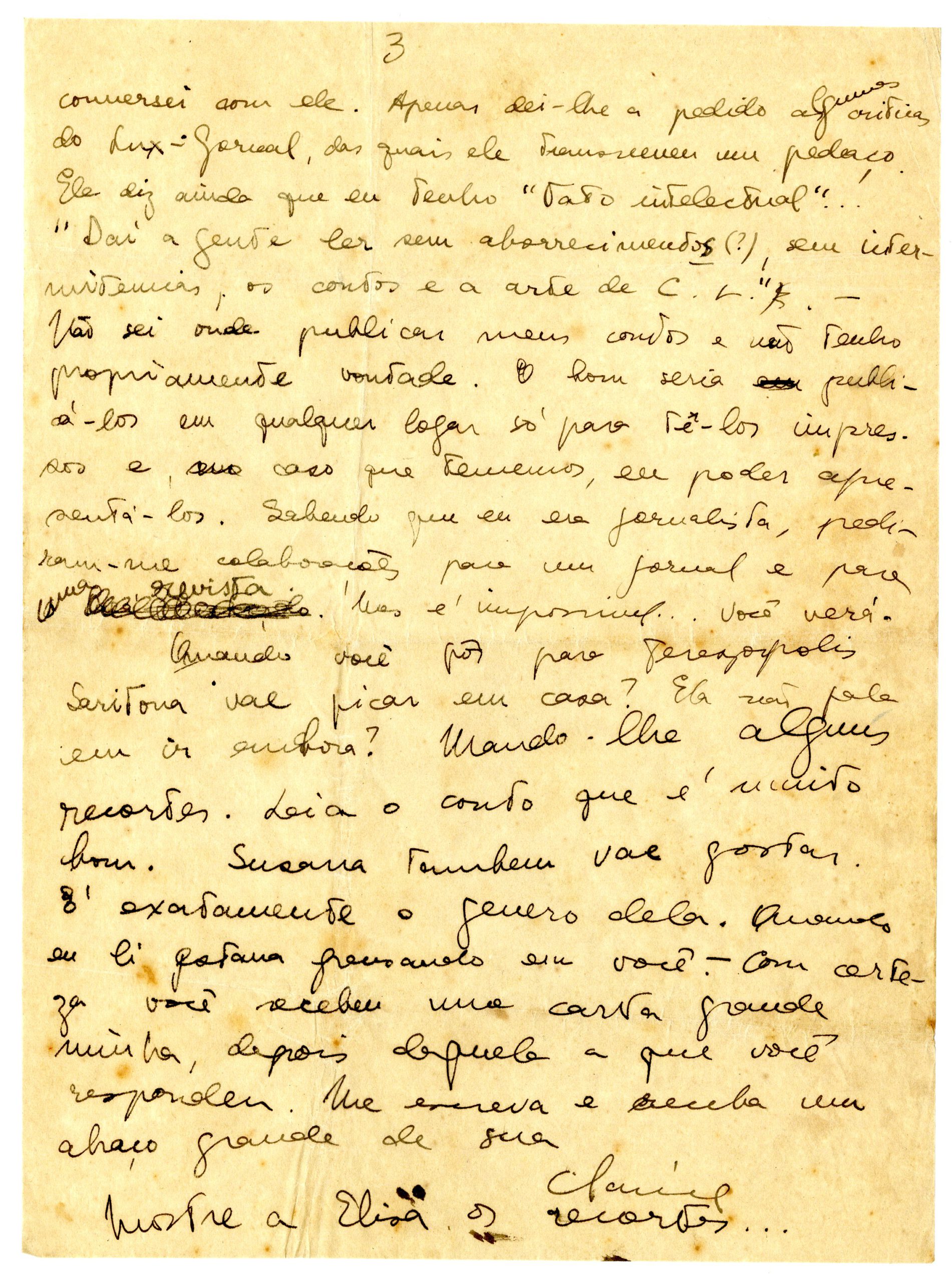 I’m only writing to you today for a little conversation, since there is nothing new to report, and I’m still busy. I received your letter from Saturday (before Carnival, I suppose) at a good time. Don’t reprimand me: but on Carnival Monday we went to a party at the house of the American Consul and I got really drunk. I said not to reprimand me because the next day I got it. I felt so sick! One of those hangovers you see in the movies. It was good to get drunk so I could demystify the idea, which poets promote and celebrate so much… It was the first and last time, no doubt. But today I’m fine and don’t feel anything. Yesterday, lying in my bed and feeling sick (Maury also came home feeling sick), I received your letter and while I read it I didn’t feel anything. When I read the story about the dumb lady who got into a misunderstanding with you, I wanted to vomit on top of her. I danced a lot at the Americans’ party. They’re very nice and lively, with beautiful teeth and, certainly, in good health. The girls who were there also had nice teeth and beautiful legs.

There was a tall, old nurse having lots of fun. And a very lively, extraordinarily fat one making jokes about her own weight, which is also somewhat sad. If we had two lives, it wouldn’t be so bad to be fat in one of them. – I didn’t write to Álvaro Lins (The article by Álvaro Lins, “Romance lírico” [Lyrical Novel], was published in Correio da Manhã on February 11, 1944 and republished under the title: “A experiência incompleta: Clarice Lispector” [The Incomplete Experience: Clarice Lispector]. Os mortos de sobrecasaca. Ensaios e estudos (1940-1960) [The Frock Coat Dead: Essays and Studies], Rio de Janeiro, Civilização Brasileira, 1963.) saying that about the novel not being “my novel” because I didn’t interpret his review that way. But one of Maury’s friends wrote (to Maury) also protesting against that insinuation. In what part did you and he deduce that? Write me – A journalist (The journalist Edgar Proença. The interview “Um minuto de palestra” [A Minute Lecture] was published in the Estado do Pará (Belém, February 20, 1944).) from here wrote a piece about me: he represents the Lux-Jornal  here and that’s how he knows about me. It gives me goosebumps. Imagine that he made me say: “I write because I find in it a pleasure that I don’t know how to translate. I am not pretentious. I write for myself, for me to feel my soul speaking and singing, sometimes crying… My first literary experiments intimidated me in the beginning. Afterwards, an immediate resolution. I published them.” I’ve read them in Vamos Ler and other magazines (he says).  – That’s right, I answered. Then I prepared the book that is a piece of my sensibility. Is your curiosity satisfied? (see what a coarse and funny question that is…) Etc. etc. I need not say that I didn’t even talk to him. I only gave him upon request some reviews of Lux-Jornal, of which he transcribed a section. He even says I have “intellectual tact” … “Thus we read without boredom, without intervals, the short stories and art of C.L.” – I don’t know where to publish my short stories and I don’t actually wish to. It would be good to publish them anywhere just to have them in print and, in case we insist, for me to be able to present them. Knowing that I was a journalist, they asked me to collaborate with a newspaper and a magazine. But it’s impossible… you’ll see.

(…) I’m sending you some clippings. Read the short story, which is very good. Susana will also like it. It’s precisely her genre. When I read it I was thinking of you. – You certainly received a long letter from me after the one that you answered. Write to me. Hugs from yours truly