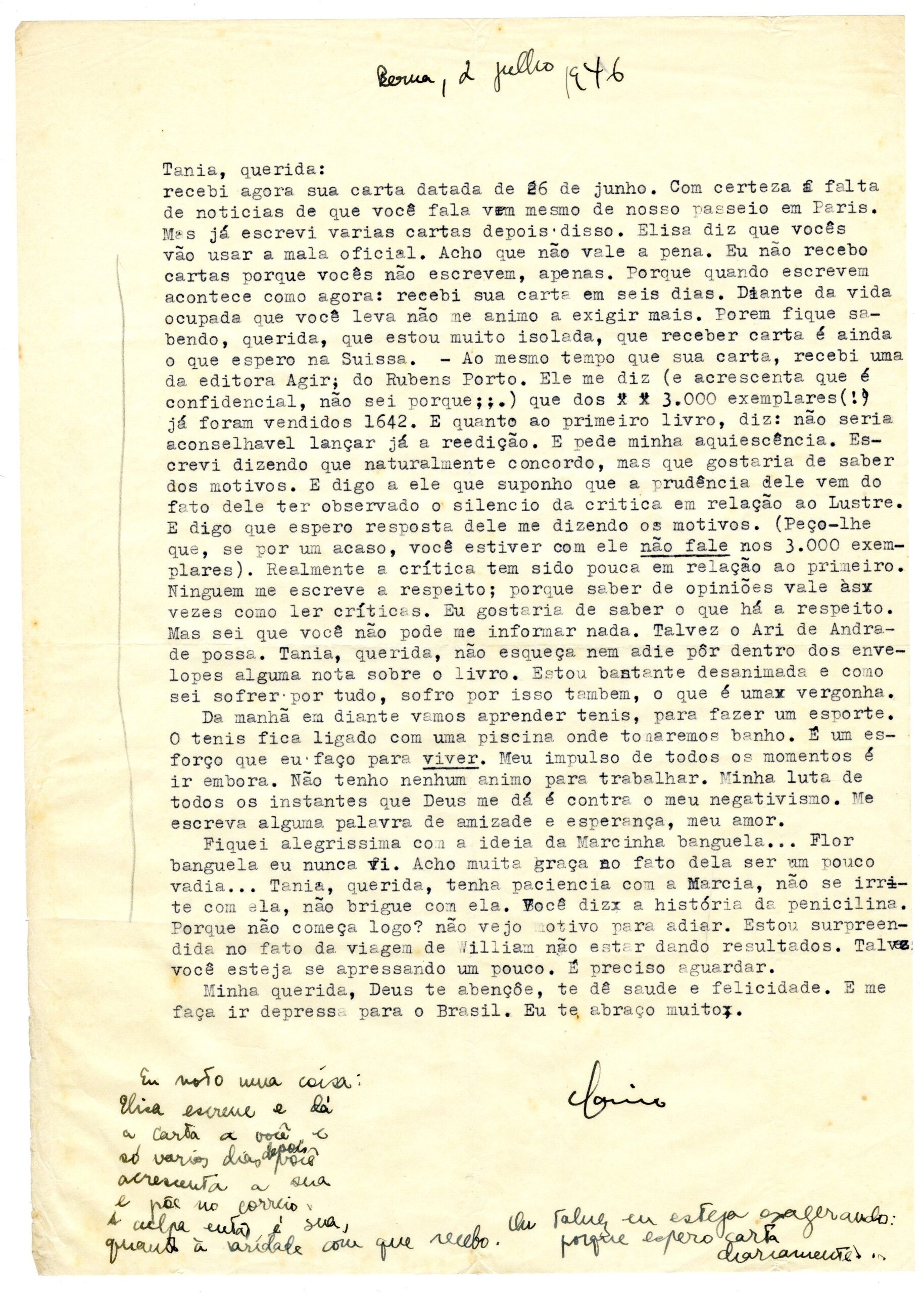 I just received your letter dated 26 June. Certainly, the lack of news that you speak of comes from our tour in Paris. But I’ve already written several letters after that. Elisa says you are going to use the diplomatic mail. I don’t think it’s worth it. I simply don’t get letters because you don’t write. Because when you do it happens like it does now: I received your letter in six days. In view of the busy life you lead, I don’t encourage myself to demand more. But know, dear, that I am very isolated, that receiving a letter is still what I hope for in Switzerland. – At the same time as your letter, I received one from the publishing house Agir; from Rubens Porto. He tells me (and adds that it is confidential, I don’t know why) that of the 3,000 copies (!) 1,642 have already been sold. As for the first book, he says: it would not be advisable to launch the reissue now. And he asks for my acquiescence. I wrote saying that naturally I agree, but that I would like to know the reasons. And I tell him that I suppose that his prudence comes from the fact that he observed the silence of criticism in relation to O Lustre. And I say I expect an answer telling me the reasons. (I ask that, if you happen to be with him, do not mention the 3,000 copies). Truly, the reviews have been few compared to the first book. Nobody writes to me about it; because knowing opinions is sometimes worth as much as reading reviews. I would like to know what there is, in this respect. But I know you can’t tell me anything. Perhaps Ari de Andrade can (the poet and journalist Ari de Andrade was a contributor to the magazine Vamos Lêr!). Tania, dear, don’t forget or postpone putting some notes on the book inside the envelopes. I am very discouraged and as I know how to suffer with everything, I suffer with this, too, which is a shame.

From tomorrow on we are going to learn how to play tennis, to have a sport. The tennis court is connected to a swimming pool where we will bathe. It is an effort that I make to live. My impulse at all times is to leave. I have no spirit to work. My struggle in all the moments that God gives me is against my negativism. Write me a word of friendship and hope, my love.

I was very happy with the idea of a toothless Marcinha … a toothless flower I’ve never seen. I find it very funny that she is a bit sassy.

… Tania, darling, be patient with Marcia, don’t get angry at her, don’t fight with her. You mention the story about penicillin. Why don’t you begin soon? I see no reason to postpone. I’m surprised that William’s trip is not paying off. Maybe you are hurrying a little. You have to wait.

My dear, God bless you, and give you health and happiness. And make me go to Brazil quickly. I give you many hugs.