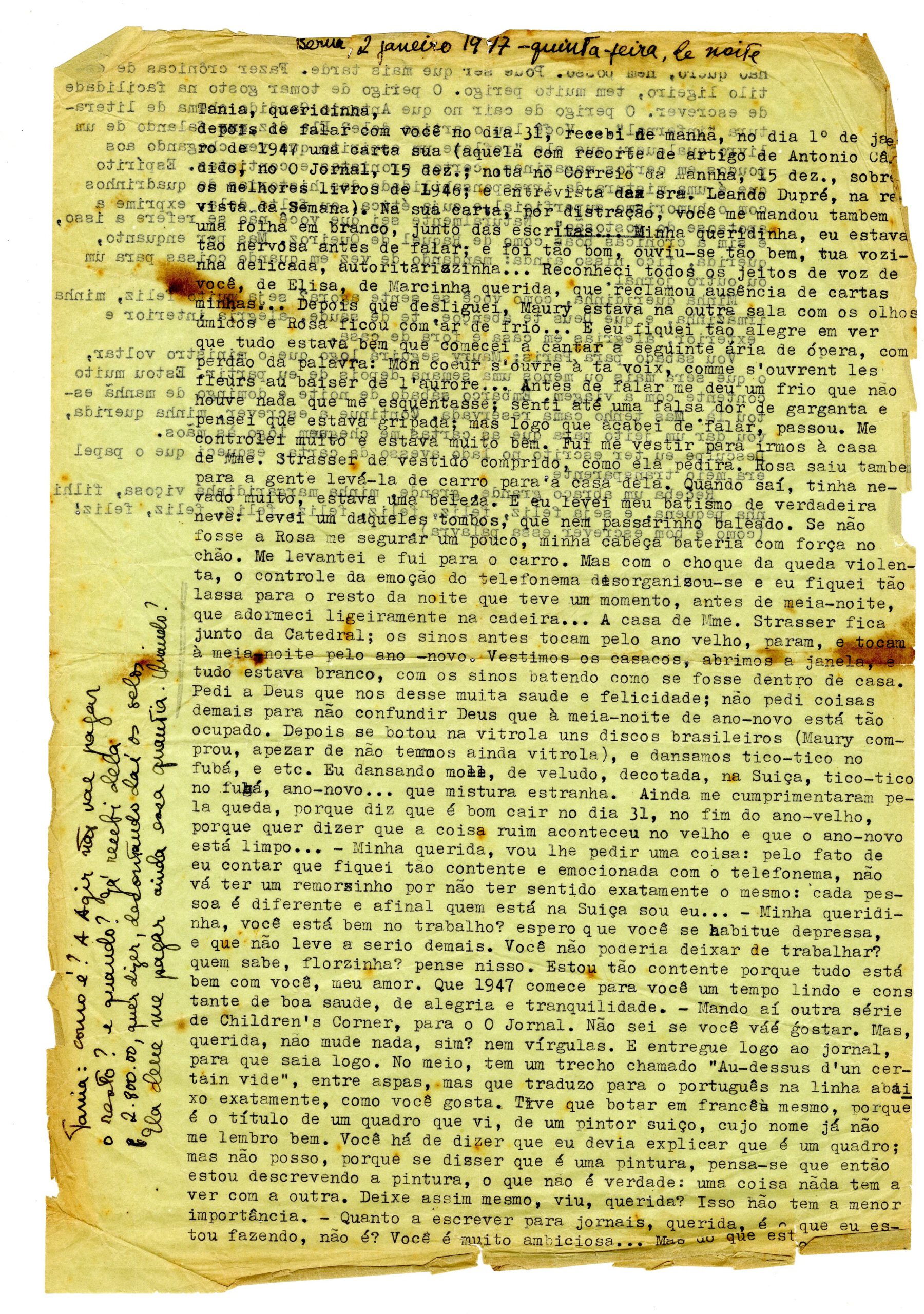 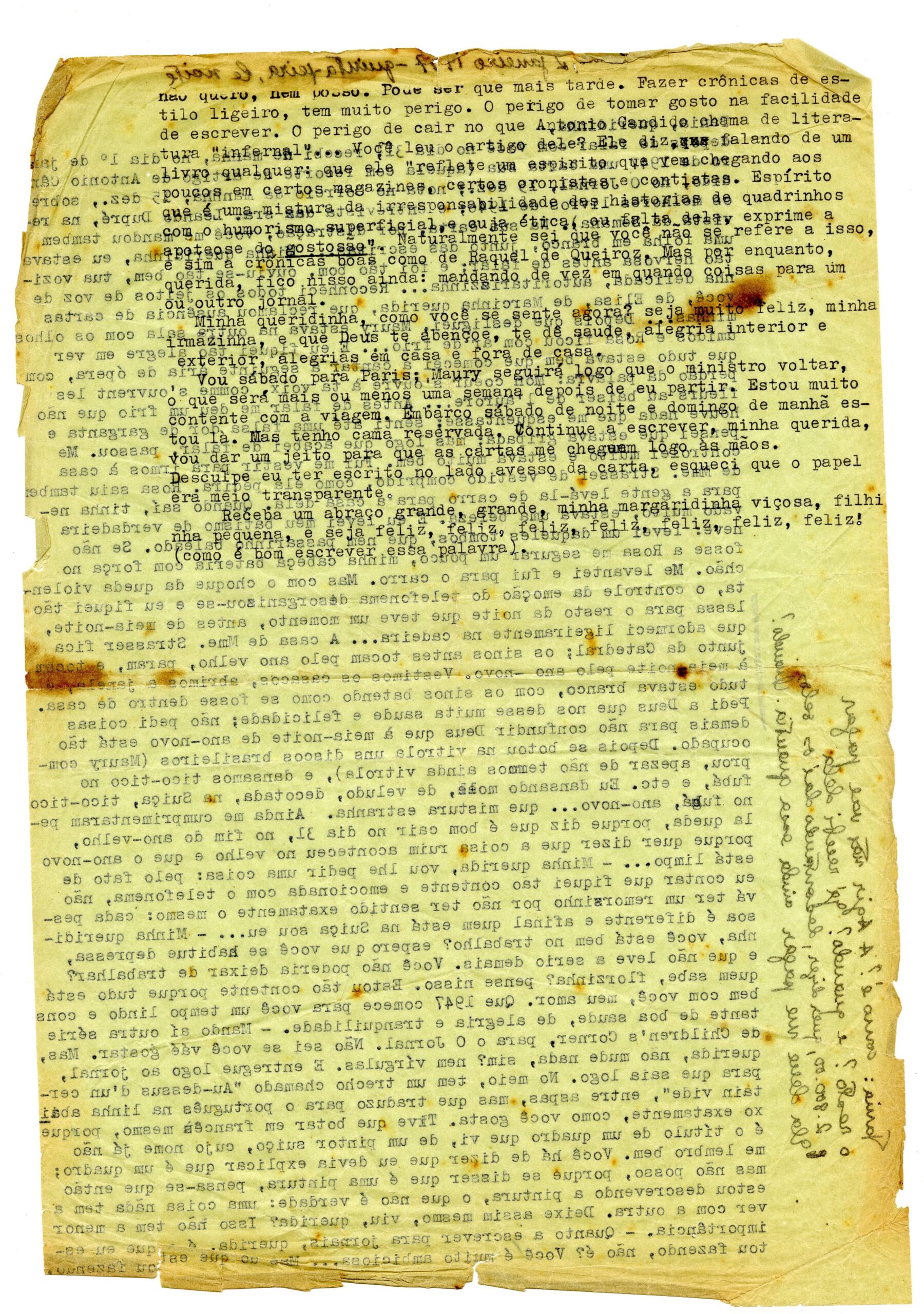 After speaking with you on the 31st, I received a letter of yours in the morning, on the 1st of January, 1947 (the one with the clipping of Antonio Cândido’s article in O Jornal, December 15; a note in the Correio da Manhã, Dec. 15., about the best books of 1946; the interview with Mrs. Leandro Dupré in the magazine Semana). In your letter, distractedly, you also sent me a blank sheet, next to the writings… My darling, I was so nervous before I spoke; and it was so good, one could hear so well your delicate little voice, a bit authoritarian… I recognized all the voice mannerisms of you, of Elisa, of dear Marcinha, who complained about the absence of letters from me… After I hung up, Maury was in the other room with teary eyes and Rosa took on a cold air… And I was so glad to see that everything was fine that I began to sing the following opera aria, excuse my French: Mon coeur s’ouvre à ta voix, comme s’ouvrent les fleurs au baiser de l’aurore… (“my heart opens to your voice, like the flowers open to the kiss of dawn.”) Before I spoke, I felt chills and nothing could warm me up; I even falsely felt I had a sore throat and thought I had the flu; but as soon as I finished speaking, it passed. I controlled myself a lot and was fine. I went to get dressed to go to Mme. Strasser’s house in a long dress, as she had requested. Rosa also left so we could drive her to her house. When I left it had snowed a lot, it was beautiful. And I received my true snow baptism: I had one of those true falls, like a bird shot in the air. If it weren’t for Rosa holding me a little, my head would have hit the ground hard. I got up and went to the car. But with the shock of the violent fall, the emotional control of the phone call became disorganized and I became so fatigued for the rest of the night that there was a moment before midnight that I fell asleep slightly in the chair… Mme. Strasser’s house is next to the Cathedral, the bells ring first for the old year, stop, and ring at midnight for the new year. We put on our coats, opened the window, and everything was white, with the bells ringing as if they were inside the house. I asked God to give us much health and happiness, I didn’t ask for too many things in order not to confuse God, who at midnight on New Year’s Eve is so busy. Then some Brazilian records were put on the player (Maury bought them, although we don’t yet have a player), and we danced tico-tico no fubá etc. Me, dancing softly, in velvet, low-cut, in Switzerland, tico-tico no fubá (“Tico-tico no fubá” (1917), by Zequinha de Abreu, was recorded by Carmen Miranda.), New Year’s… what a strange mix. They even complimented me for the fall, because they say it is good to fall on the 31st, at the end of the old year, because it means that the bad thing happened in the old year and the new year is clean… – My dear, I’m going to ask something of you: the fact that I told you I was so happy and emotional with the phone call, don’t have any regrets for not feeling exactly the same: Each person is different and after all I’m the one in Switzerland… – My darling, are you OK at work? I hope you get used to it soon, and don’t take it too seriously. Couldn’t you stop working? Who knows, little flower? Think about it. I’m so happy because everything is fine with you, my love. May the year 1947 begin for you a beautiful and constant time of good health, joy and tranquility. – I’ll send another series of “Children’s Corner” for O Jornal. I don’t know if you’ll like it. But dear, don’t change anything, okay? Not even commas. And give it to the paper right away so that it comes out soon. In the middle, there’s a passage called “Au-dessus d’un certain vide,” in quotes, but I translate it in the line below into Portuguese exactly, as you like it. I had to put it in French because it is the title of a painting I saw, by a Swiss painter, whose name I can’t remember very well. You’re going to say that I should explain that it is a painting; but I can’t, because if I say that it’s a painting, then one will think that I’m describing the painting, which is not true: one thing has nothing to do with the other. Leave it like that, okay, dear? It’s not important. – As for writing for the papers, darling, that’s what I’m doing, isn’t it? You are very ambitious… I don’t want to do more than what I’m doing, nor can I. Maybe later. There’s a lot of danger in writing chronicles in a hasty style. The danger of taking pleasure in the ease of writing. The danger of falling into what Antonio Cândido calls “infernal” literature… Did you read his article? He says, speaking of some book: that it “reflects a spirit that has been arriving gradually in certain magazines, certain chroniclers and short story authors. A spirit that is a mix of comic book irresponsibility with superficial humor, and whose ethics, or lack thereof, expresses the apotheosis of the hottie.” Naturally, I know that you don’t refer to this, but to the good chronicles such as those of Raquel de Queiroz. But for now, darling, this is how it’ll be: sending things now and again to one newspaper or another.

My darling, how do you feel now? Be very happy, my dear sister, and God bless you, give you health, inner and outer joy, joys at home and away from home.

I’m going to Paris on Saturday: Maury will follow as soon as the minister returns, which will be about a week after I leave. I’m very happy about the trip. I board Saturday night and Sunday morning I’m there. But I have a bed reserved. Keep writing, my dear, I’ll arrange for the letters to reach me soon. Sorry I wrote on the wrong side of the letter, I forgot the paper is sort of transparent.

Tania: what’s going on? Isn’t Agir going to pay the rest? And when? I’ve already received 2,800.00 from them, that is, discounting the stamps. They still have to pay me that amount. When?