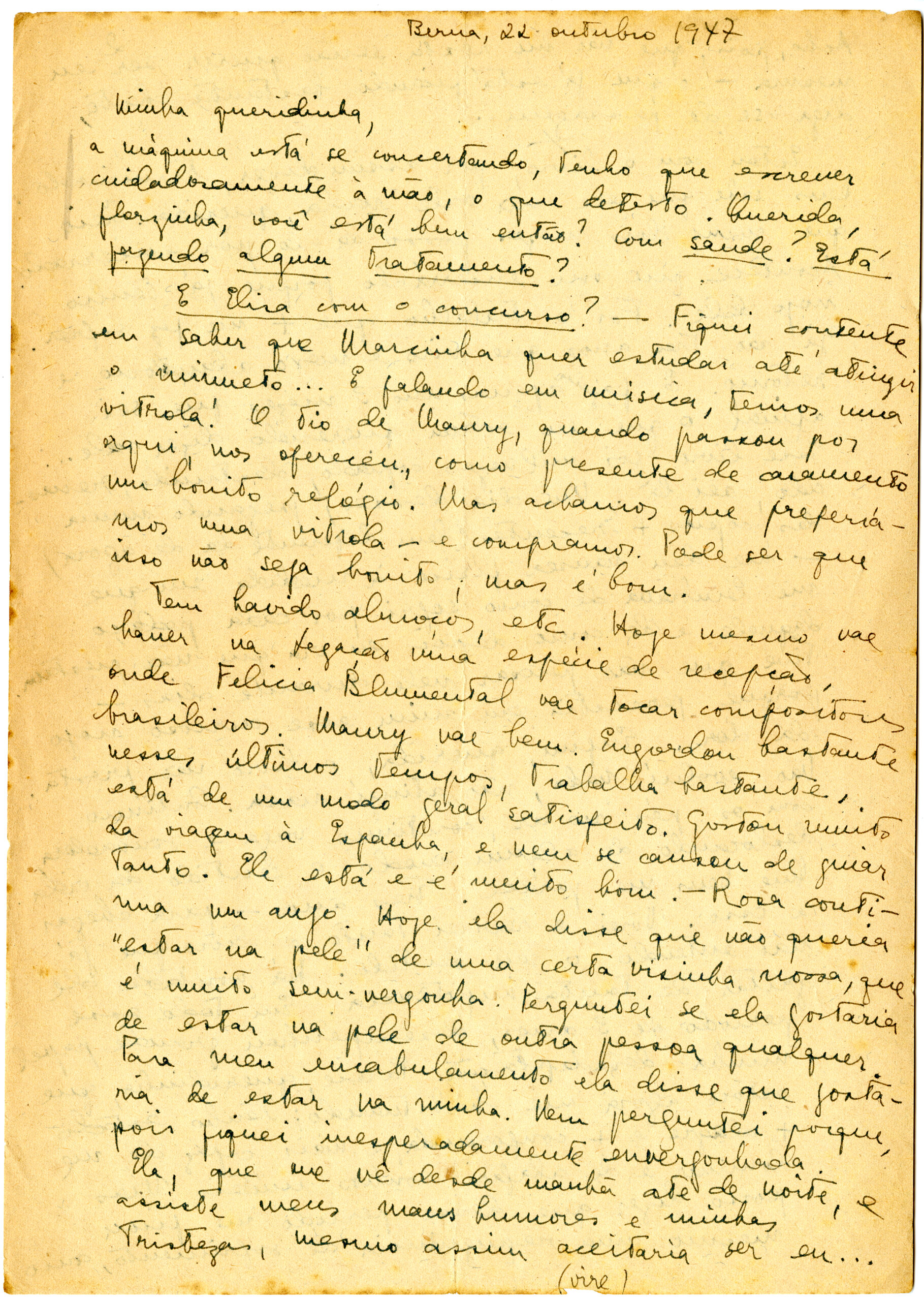 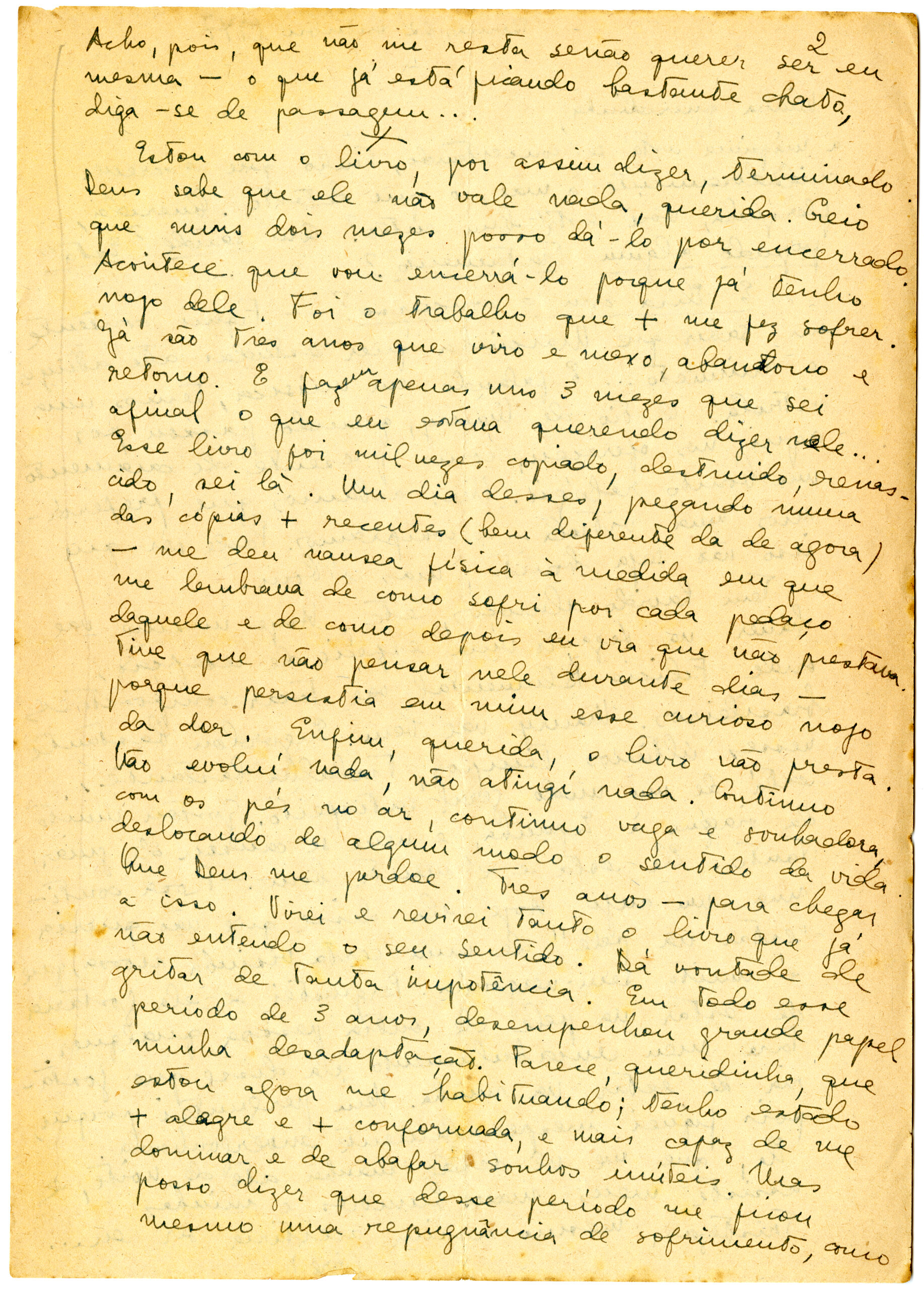 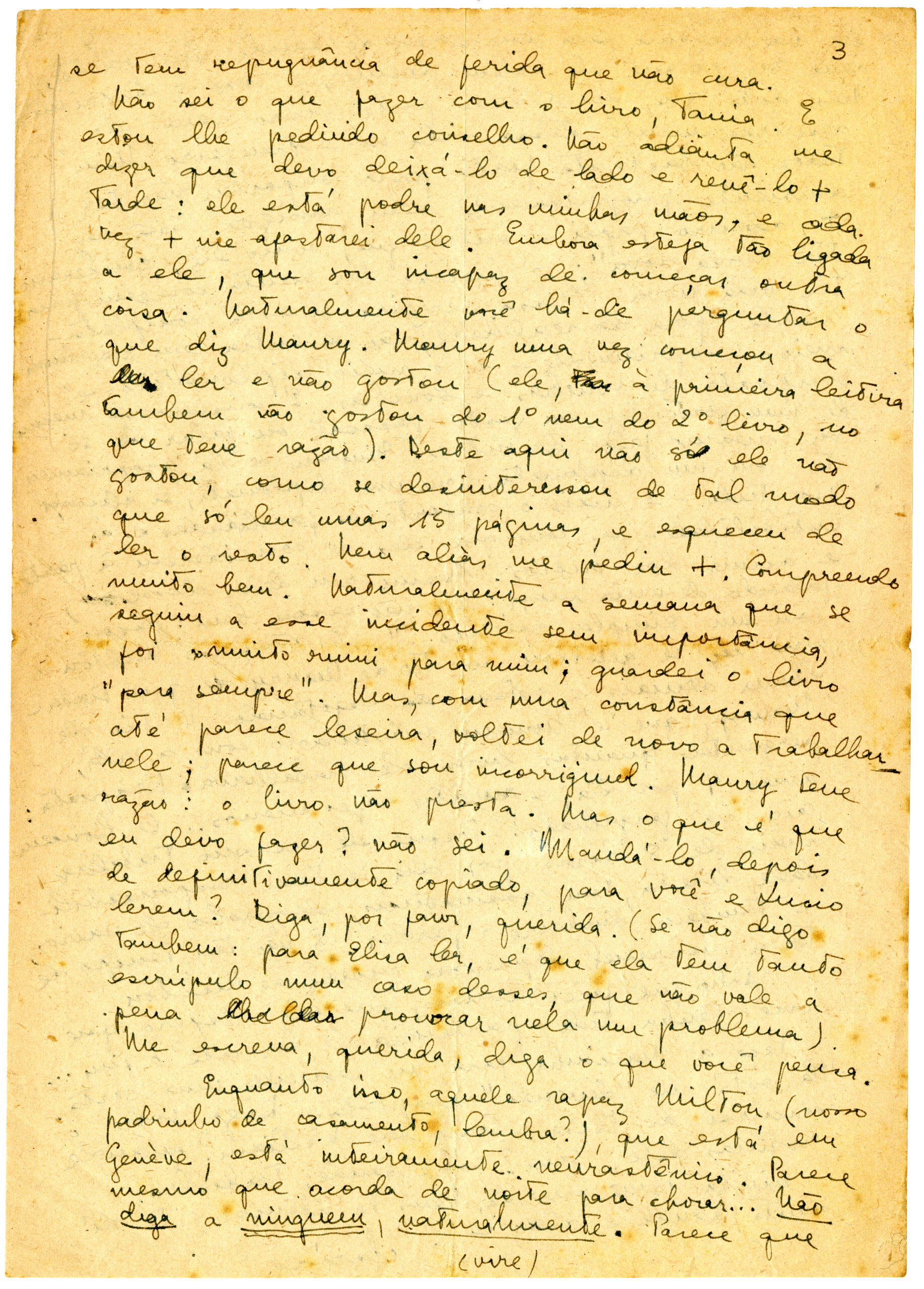 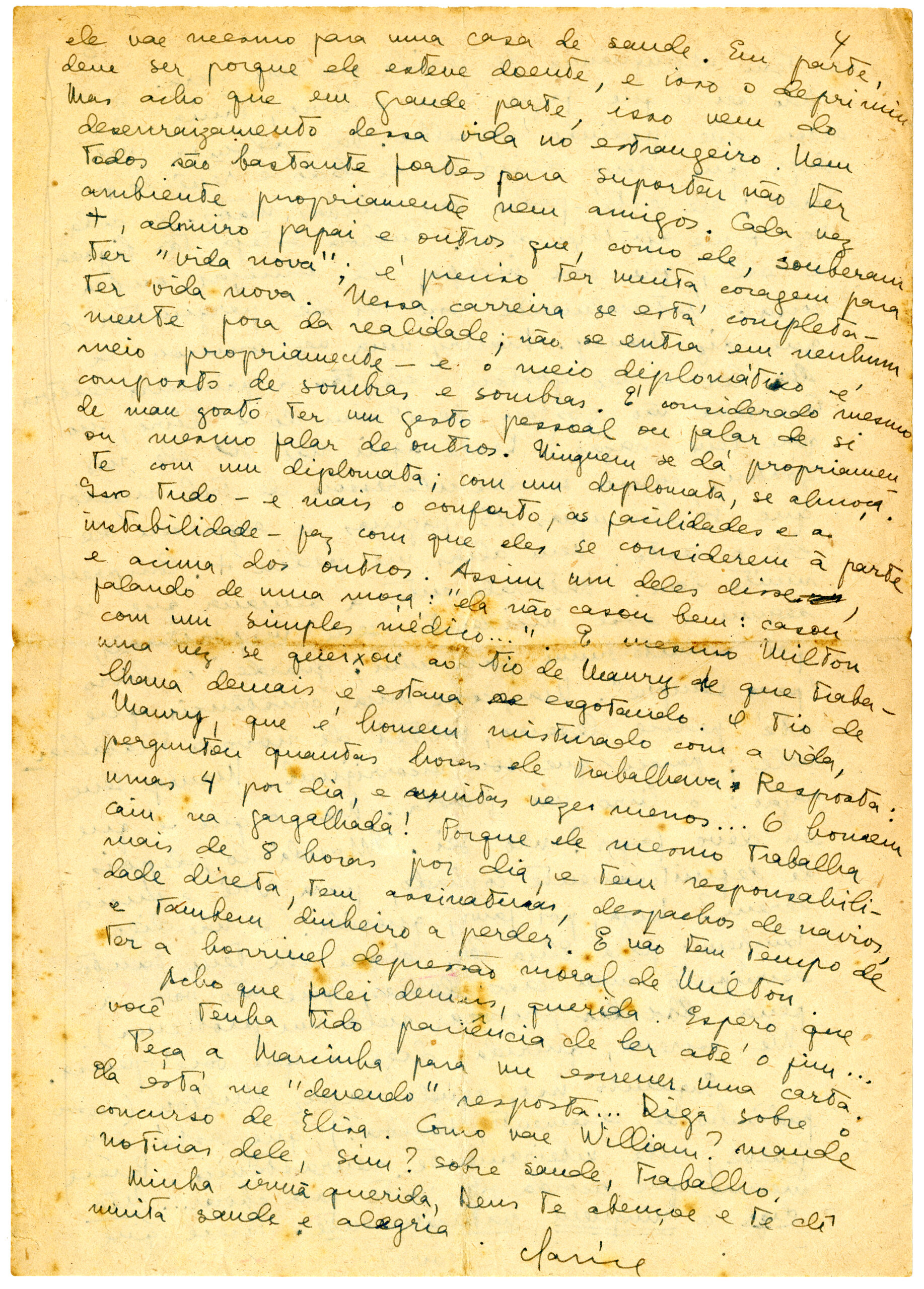 The typewriter is being repaired, I have to write carefully by hand, which I hate. Darling, little flower, are you well then? Healthy? Are you undergoing any treatment?

And Elisa, with the public job application? – I was glad to know that Marcinha wants to study until she manages the minuet… And speaking of music, we have a record player! Maury’s uncle, when he came by, offered us as a wedding present a pretty clock. But we thought we’d prefer a record player – and bought it. It may not be pretty, but it’s good.

There have been luncheons, etc. Today there will be a kind of reception at the Embassy, where Felícia Blumental will play Brazilian composers. Maury is well. He’s put on a lot of weight lately, he works a lot, he is in general content. He really enjoyed the trip to Spain, and didn’t even get tired of driving so much. He is good and doing well. – Rosa’s still an angel. Today she said she wouldn’t want to be “in the shoes” of a certain neighbor of ours who is very shameless. I asked if she’d like to be in the shoes of anyone else. To my embarrassment she said she’d like to be in mine. I didn’t even ask why because I was unexpectedly embarrassed.

Even after seeing me from morning to night, and witnessing my bad moods and sorrows, she would nonetheless accept being me… I think, then, that I have nothing left but to want to be myself – which is already getting quite boring, by the way…

The book is, so to speak, finished. God knows it’s worthless, darling. I believe that in about two months I can call it quits. As it happens, I’ll end it because I’m sick of it. It was the work that made me suffer the most.  I’ve been tinkering with it for three years, abandoning it and returning to it. And it’s only been about three months since I finally found out what I was trying to say in it… This book has been copied, destroyed, resurrected, I don’t know, a thousand times. One of these days, picking up one of the more recent copies (quite different from the current one) – I felt physically nauseous as I remembered how I suffered because of every part of it and how I saw that it was useless. I had to stop thinking about it for days – because this curious disgust from the pain persisted in me. Anyway, dear, the book is horrible. I haven’t evolved at all, I haven’t attained anything. I still have my head in the clouds, I remain vague and dreamy, dislocating in some way the meaning of life. May God forgive me. Three years – to arrive at this. I tinkered and retinkered with the book so much that I no longer understand its meaning. So much impotence makes me want to scream.

Throughout this 3-year period, my mal-adaptation has played a major role. It seems, darling, that I am getting used to it now; I have been happier and more resigned, and more able to control myself and smother useless dreams. But I can say that from this period a real repugnance of suffering has stayed with me, as one has repugnance of a wound that won’t heal. I don’t know what to do with the book, Tania. And I’m asking you for advice. It’s no use telling me I should set it aside and revise it later: it is rotten in my hands, and more and more I will distance myself from it. Although I’m so attached to it that I’m incapable of starting anything else. Of course, you’ll ask what Maury says. Once Maury started to read it and did not like it (he, at first reading, didn’t like the 1st or the 2nd book, for which he was right). Not only did he not like this one, he became so disinterested that he only read about 15 pages, and forgot to read the rest. He didn’t even ask me for more. I understand very well. Of course, the week that followed that minor incident was very bad for me; I put the book away “forever.” But, with a constancy that even seems harmful, I went back to work on it again; I seem to be incorrigible. Maury was right: the book is no good. But what am I supposed to do? I don’t know. Send it, after it is definitively copied, for you and Lucio to read? Tell me, please, darling. (If I don’t ask Elisa to also read it, it’s because she has so many scruples in a case like this, that it’s not worth causing any problems for her.) Write to me, darling, tell me what you think.
Meanwhile, that young man, who is in Geneva, is completely neurasthenic. It seems he really wakes up at night to cry… Don’t tell anyone, of course. It seems that he will indeed go to a health facility. In part, it must be because he was ill and this depressed him. But for the most part, I think that it comes from the uprootedness of this life abroad. Not everyone is strong enough to bear not having an environment of their own, or friends. More and more, I admire Dad and others who, like him, knew how to have a “new life;” it takes a lot of courage to have a new life. In this career if you are completely out of touch with reality, you don’t enter into any circle properly – and diplomatic circles are composed of shadows and shadows. It is indeed considered in bad taste to have personal tastes or talk about yourself or even talk about others. No one exactly gets along with a diplomat; with a diplomat, one dines. All of this – plus the comfort, the facilities, and the instability – makes them consider themselves apart from and above others. So one of them said, speaking of a young woman: “she did not marry well: she married just a doctor…” And even he once complained to Maury’s uncle that he worked too much and was burning out. Maury’s uncle, who is a man embroiled in life, asked how many hours per day he worked. Answer: about 4 per day, and often less… The man burst out laughing! Because he himself works more than 8 hours a day, and has direct responsibility, has signatures, ship dispatches, and also money to lose. And he doesn’t have time to have M.’s horrible moral depression.

I think I’ve said too much, dear. I hope you had the patience to read to the end…

Ask Marcinha to write me a letter. She “owes me” a response… about Elisa’s public job exam. How’s William? Send news of him, alright? About health, work.

My dear sister, God bless you and give you much health and joy.