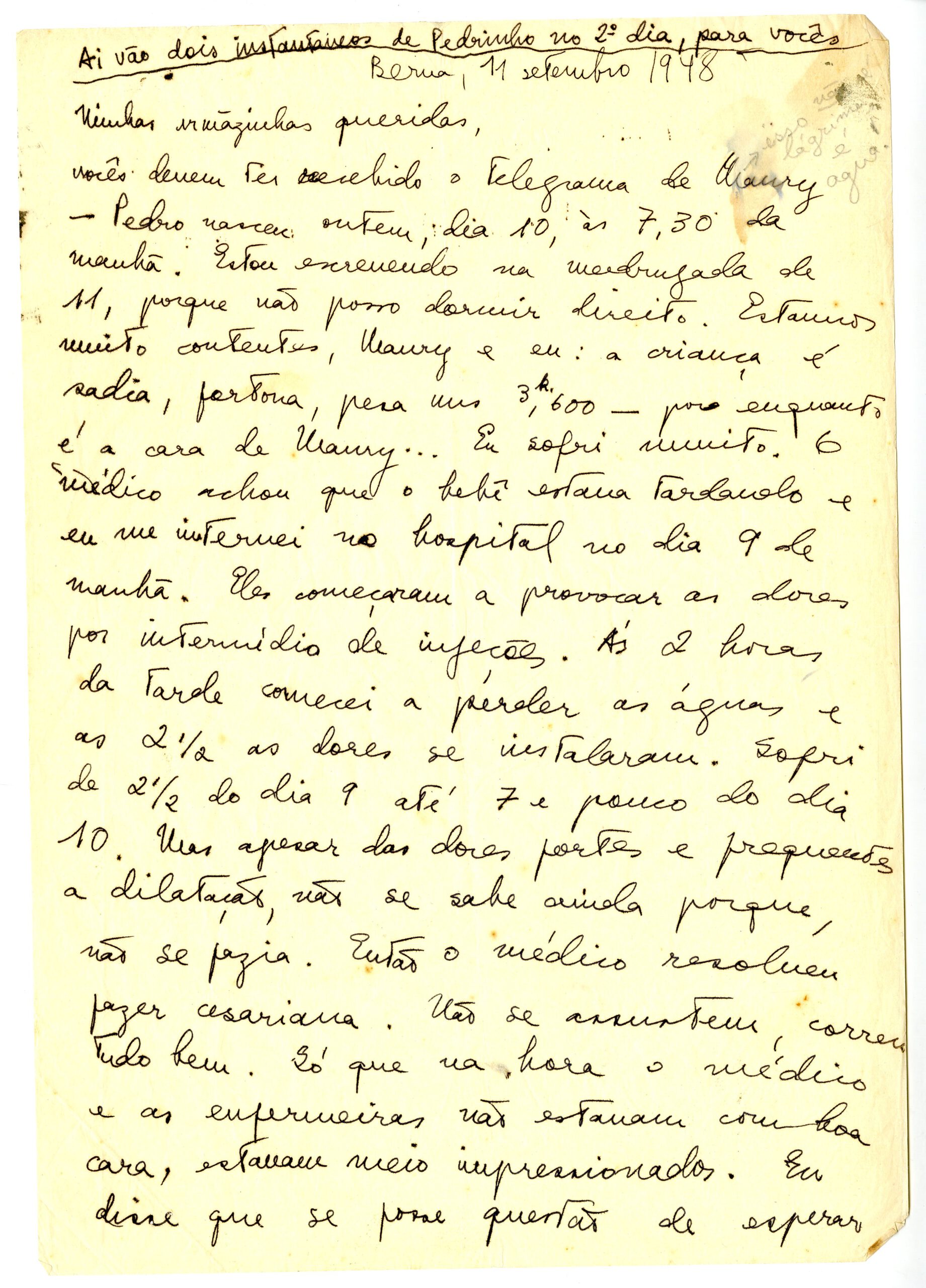 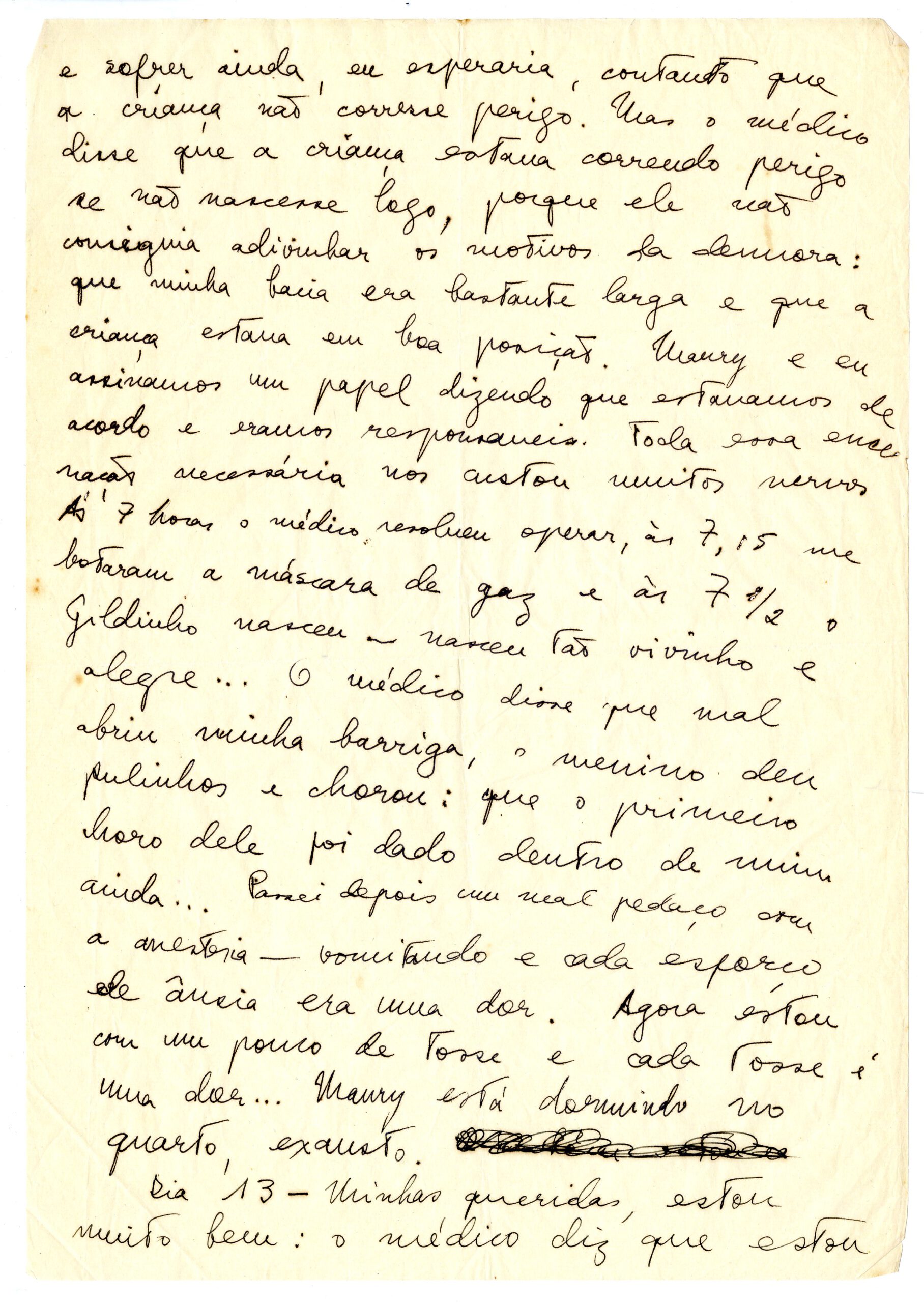 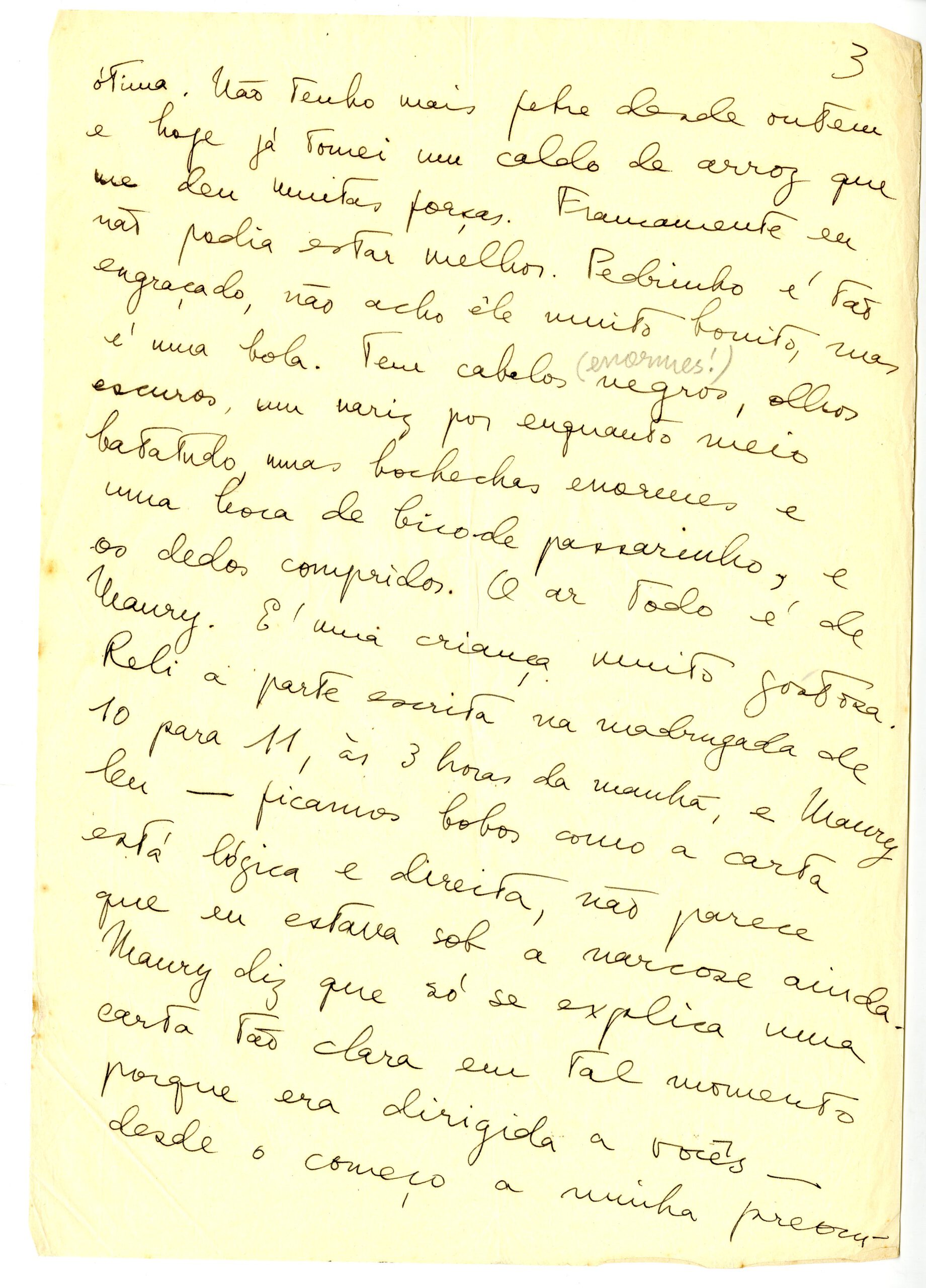 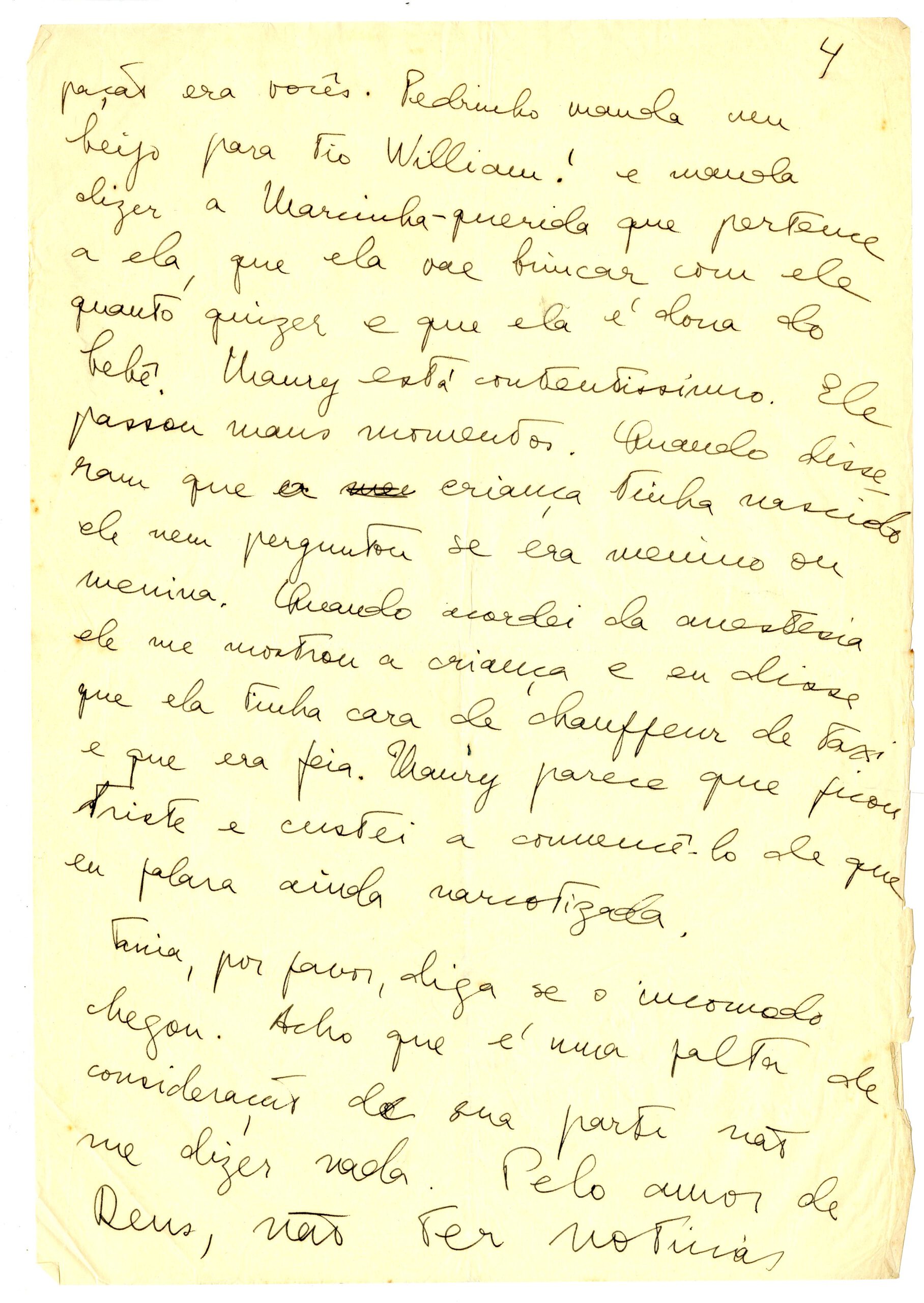 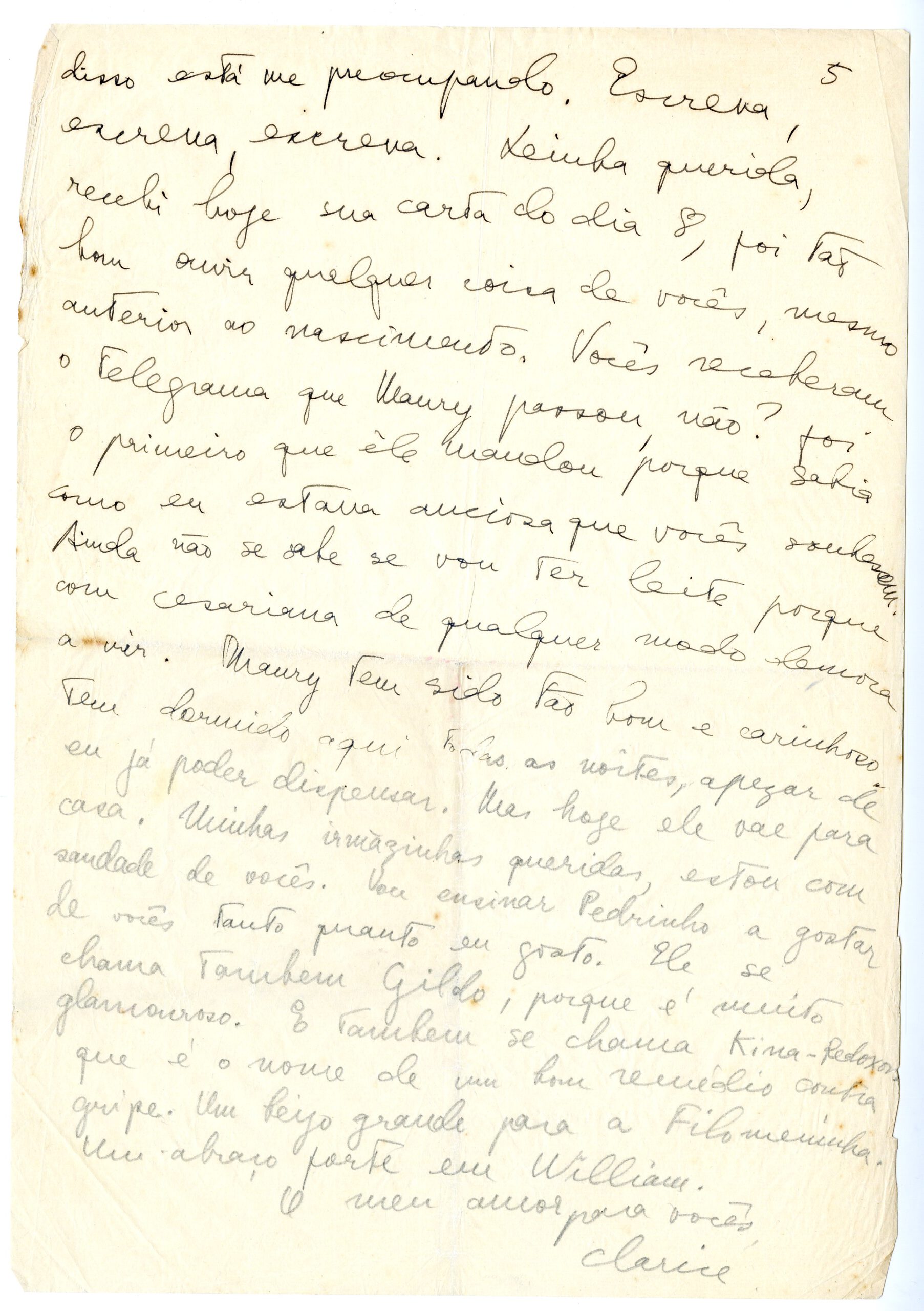 You must have received Maury’s telegram – Pedro was born yesterday, the 10th, at 7:30 a.m. I’m writing in the middle of the night of the 11th, because I can’t sleep properly. We are very happy, Maury and I: the child is healthy, strong, weighs about three kilos, six hundred – for now he looks just like Maury… I suffered a lot. The doctor thought the baby was late and I was admitted to the hospital on the 9th in the morning. They started to provoke pains through injections. At 2 p.m. my water started to break and at 2:30 p.m. the pains settled in. I suffered from 2:30 p.m. on the 9th until 7 something on the 10th. But despite the strong and frequent pains the dilation, for reasons as yet unknown, didn’t happen. So, the doctor decided to do a caesarean. Don’t be frightened, everything went well. But at the time the doctor and nurses were not looking good, they were a little impressed. I said that if it was a matter of waiting and suffering, I would wait, as long as the child was not in danger. But the doctor said the child would be in danger if he was not born soon, because he couldn’t guess the reasons for the delay; that my pelvis was wide enough and that the child was in a good position. Maury and I signed a paper saying that we were in agreement and that we were responsible. This entire necessary scene cost us a lot of nerves. At 7 o’clock the doctor decided to operate, at 7:15 they put the gas mask on me, at 7:30 Gildinho was born – he was born so alive and happy … The doctor said that he had barely opened my belly and the boy jumped and cried: that his first cry came from within me still… I then had a bad spell with the anesthesia– vomiting and each retching movement was painful. Now I have a bit of a cough and each cough is painful… Maury is sleeping in the room, exhausted.

The 13th – My dears, I am very well: the doctor says that I’m fine. I haven’t had a fever since yesterday and today I’ve already had a rice broth that gave me a lot of strength. Frankly, I couldn’t be better. Pedrinho is so funny, I don’t think he’s very handsome, but he’s a ball. He has (long) black hair, dark eyes, a nose that is for the moment a little bit thick, huge cheeks and a bird’s beak mouth, and long fingers. Everything about him comes from Maury. A very cute child. I re-read the part written in the early hours of the 10th to the 11th, at 3 in the morning, and Maury read it – we were astounded how the letter is logical and correct, it doesn’t seem like I was under narcosis yet. Maury says the only explanation for such a clear letter at such a time is because it was addressed to you two– from the beginning my concern was you. Pedrinho sends a kiss to Uncle William! And tell Marcinha–dear that he belongs to her, that she will play with him as much as she wants and that the baby is hers. Maury is very happy. He had a hard time. When they said that the child had been born, he asked if it was a boy or girl. When I awoke from the anesthesia, he showed me the child and I said he had the face of a taxi driver and that he was ugly. Maury seems to have been saddened by this and it was hard to convince him that I had spoken while still drugged.

Leinha dear, I received your letter from the 8th, it was so good to hear anything from you, even before the birth. You received the telegram Maury sent, right? It was the first he sent because he knew how anxious I was for you all to know. It’s not yet known if I will have milk because with a C-section in any case it takes time to come. Maury has been so nice and affectionate, he’s been sleeping here every night, even though this is no longer necessary. But today he’s going home. My dear sisters, I miss you. I’ll teach Pedrinho to like you as much as I do. He’s also called Gildo, because it’s very glamorous. And he’s also called Kina-Redoxon, which is the name of a good flu medicine. A big kiss for Filomeninha. A big hug for William.

My love to you both.

P.S.: Here are two snapshots of Pedrinho on the second day, for you both.