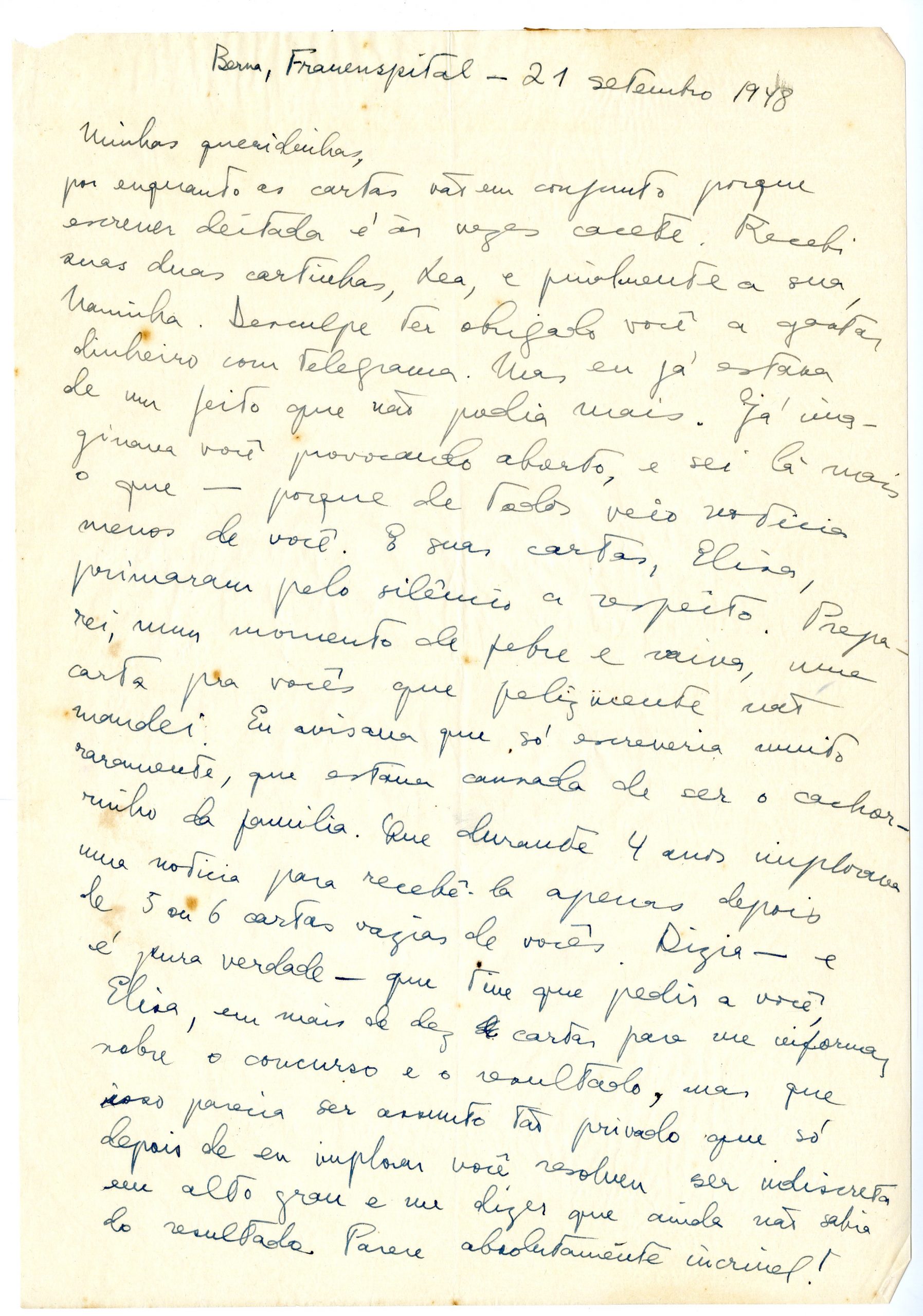 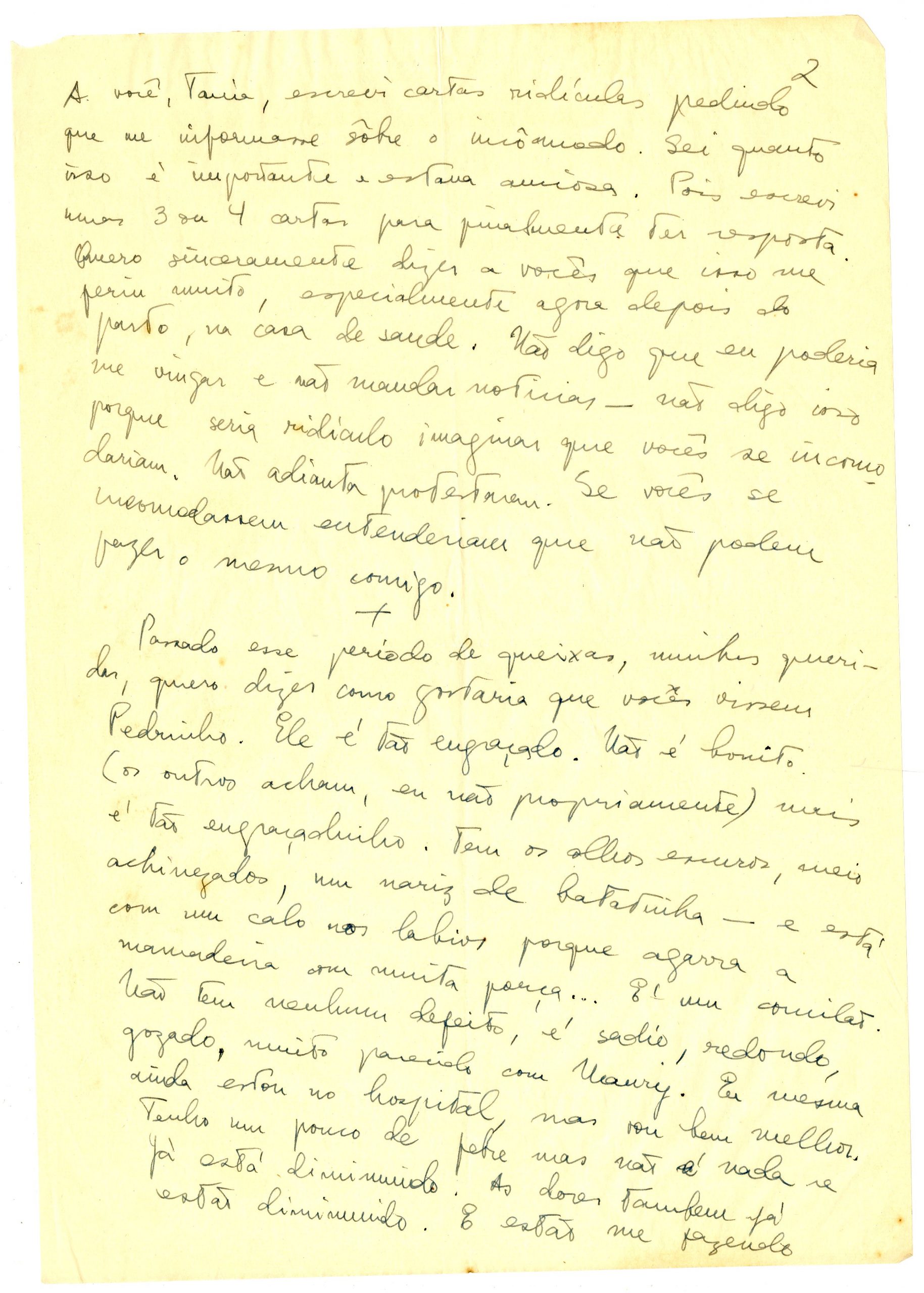 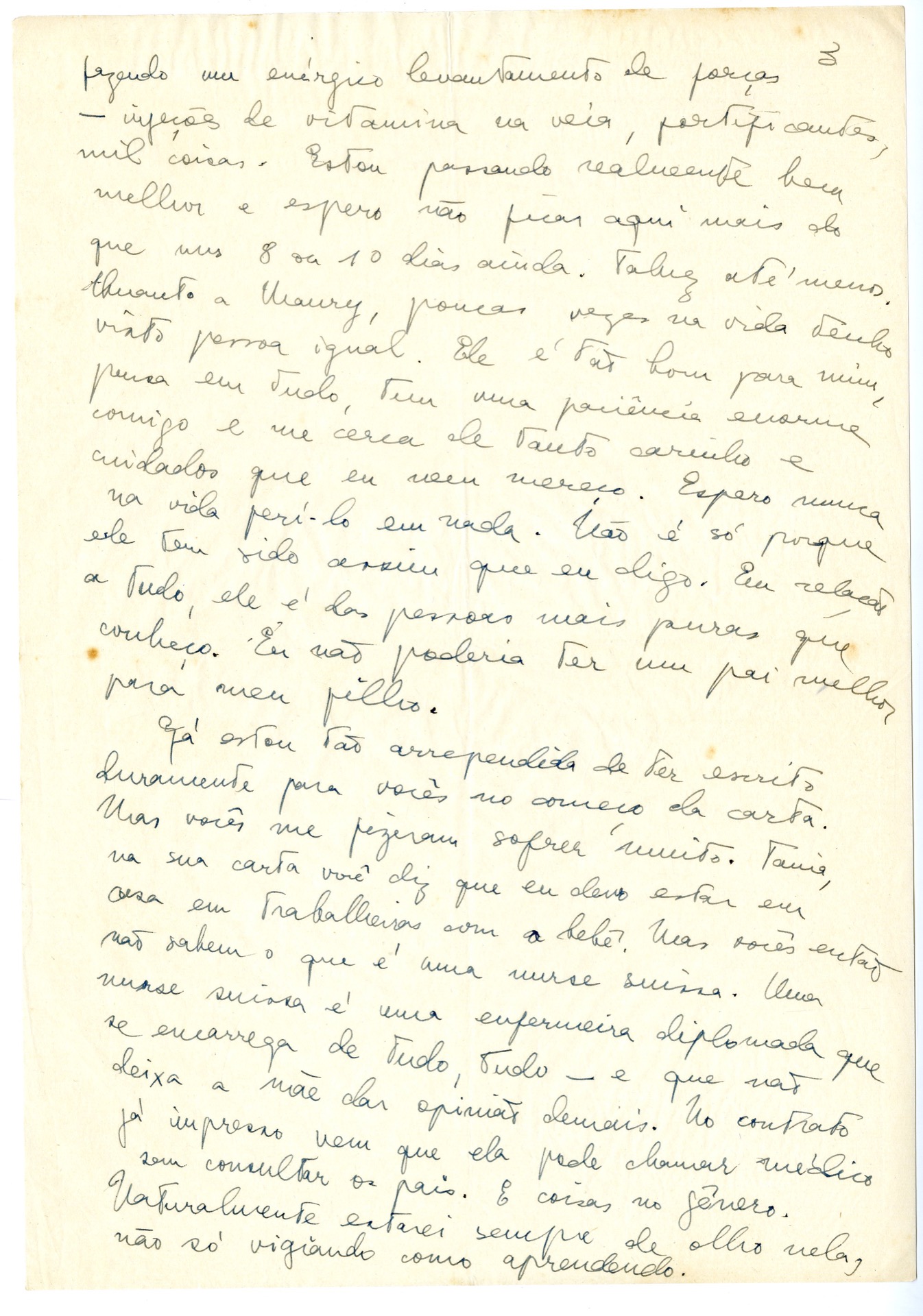 For now the letters are going out together because writing while lying down at times sucks. I received your two letters, Lea, and finally yours, Naninha. I’m sorry I made you spend money on a telegram. And your letters, Elisa, stood out for their silence in this regard. I prepared, in a moment of fever and anger, a letter which fortunately I did not send. I warned that I would write only very rarely, that I was tired of being the family puppy. Who for four years begged for news, to receive it only after 5 or 6 empty letters from you. It said – and it is completely true – that I had to ask you, Elisa, in more than ten letters to inform me of the results of the public job application exam, but that this seemed to be such a private matter that only after I begged you resolved to be extremely indiscreet and tell me you still didn’t know the result. It seems absolutely incredible! To you, Tania, I’ve written ridiculous letters. I know how important this is and I was anxious. I wrote something like 3 or 4 letters to get an answer. I want to tell you sincerely that this hurt me a lot, especially now after my giving birth, at the clinic. I don’t say that I could take revenge and not send news – I don’t say this because it would be ridiculous to imagine that the two of you would be bothered. There’s no point in protesting. If you were bothered you would understand that you cannot do the same to me.

Having passed this period of grievances, my dears, I want to say how much I would like you to see Pedrinho. He’s so funny. He’s not handsome (others think so, I don’t really) but he is so cute. He has dark eyes, half Chinese-like, a little potato nose – and he has a callus on his lips because he grasps the bottle too tightly… and he’s a big eater. He has no defects, is healthy, round, cute, very similar to Maury. I’m still in the hospital, but I’m doing much better. I have a bit of a fever but it is nothing and already going down. The pains are also subsiding. And they’re energetically raising my strengths – injections of vitamins into the veins, fortifiers, a thousand things. I’m really doing a lot better and hope I won’t be here for more than 8 or 10 more days. Maybe less. As for Maury, few times in my life have I seen someone like him. He’s so good to me, thinks of everything, is enormously patient with me and surrounds me with so much affection and care that I don’t even deserve. I hope that in my life I never hurt him at all. Not just because he has been the way that I say. In relation to everything, he’s one of the purest people I know. I couldn’t have a better father for my son.

I’m already sorry that I wrote harshly to you at the beginning of the letter. But you made me suffer a lot. Tania, in your letter you say I should be at home, taking due care of the baby. But you don’t know what a Swiss nurse is, then. A Swiss nurse is a registered nurse who is in charge of everything, everything- and who does not let the mother give too many opinions. In the printed contract it states already that she can call a doctor without consulting the parents. And things like that. Naturally, I’ll always have my eye on her, not just watching but also learning. But one can easily deliver a child to her care and go on a trip. (I won’t do this unless it is very necessary or after knowing my nurse well.) Pedrinho is easygoing, it seems. But with such an annoying mother, it’s better he be raised by a peaceful person, who will give him good habits and good nerves, don’t you think? Maury is very happy with the boy. As I told you, he was born with long, black hair, they were curly from the beginning. The little eyes are very alive, he has a strong cry, like a mallard calling other mallards in a river. He has very cute little hands. And a respectable pair of cheeks, a slightly pointed chin, the upper lip more prominent than the lower. The ears are glued to his head, for now. And every now and then he sighs… Anyway, I’d like to share with you the joys of Pedro’s faces. Did Marcinha receive my birthday card? How did she receive the news of Pedro? Write to me, please. If you feel like it. From now on, I will only write in response to letters. Don’t worry about my health, I assure you that now I couldn’t be better. A thousand hugs,

I’m not nursing. I had very little milk, also, because I went many days without eating or drinking. And they still took the milk I had, preventing me from coming, I think in order not to tire me. But Pedrinho doesn’t need it.