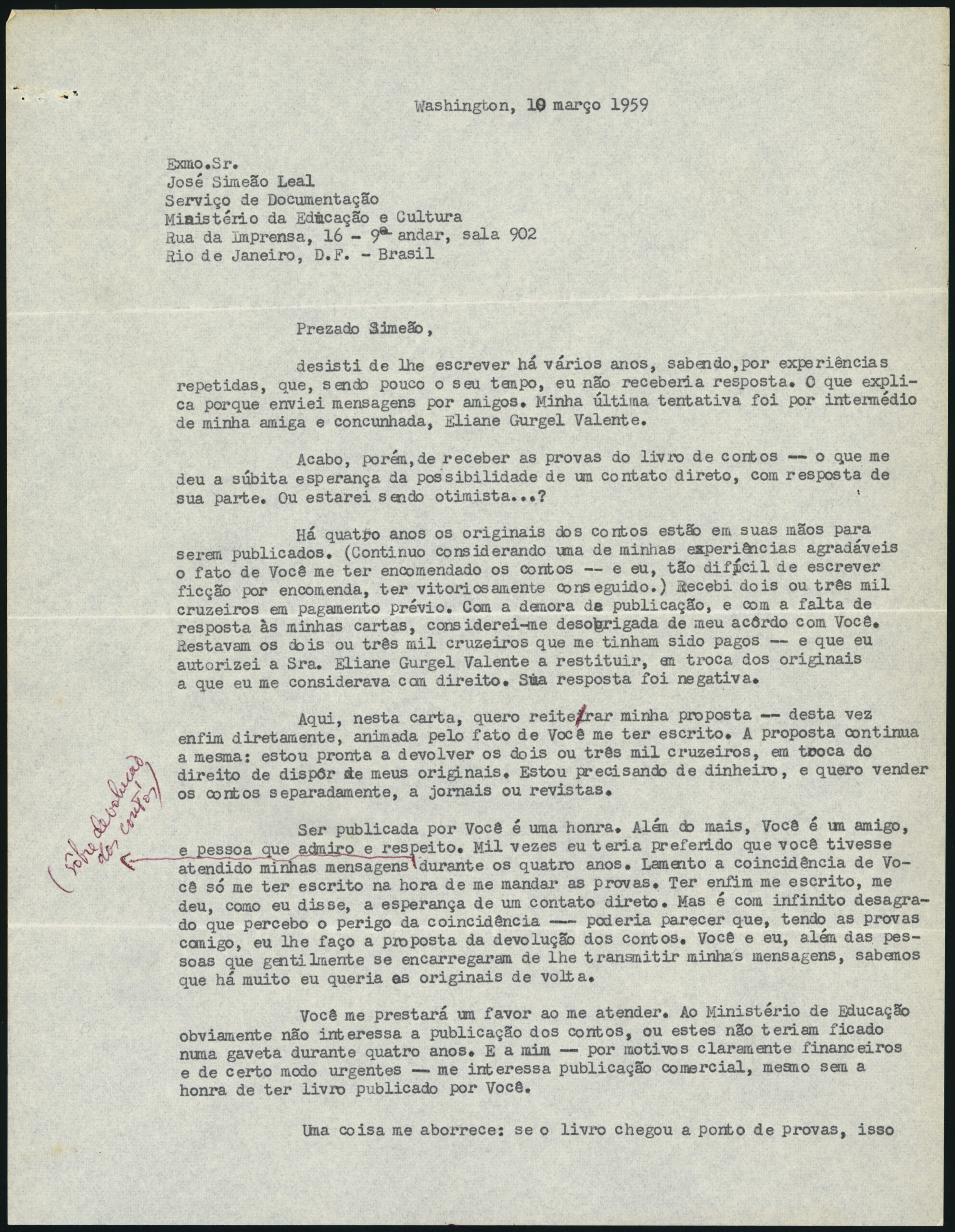 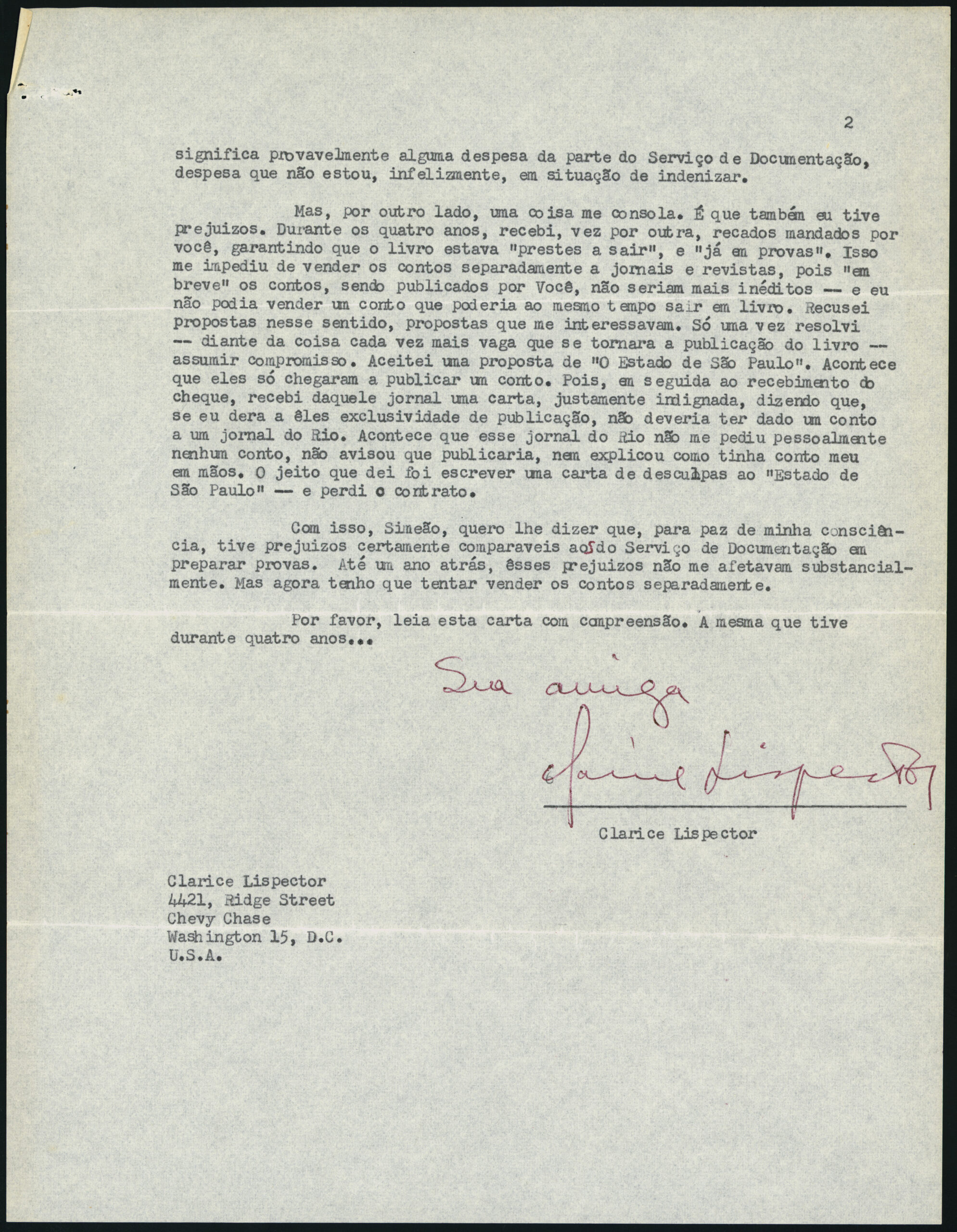 I stopped writing to you several years ago, knowing, due to repeated experiences, that, your time being short, I would not receive a reply. That is why I sent messages via friends. My last attempt was through my friend and husband’s sister, Eliane Gurgel Valente.

I have nonetheless just received the proofs of the book of short stories – which made me suddenly hope for the possibility of a direct contact, with an answer on your part. Or am I being optimistic…?

For four years, the original versions of the short stories have been in your hands, waiting to be published. (I am still so pleased that you commissioned the short stories – and that I, who find it so difficult to write fiction by commission, victoriously succeeded.) I received Cr$2000 or Cr$3000 in advance payment. With the delay in publication, and with the lack of a reply to my letters, I considered myself free of any obligations to you. There remained only the Cr$2000 or Cr$3000 that were paid to me – and that I authorized Mrs. Eliane Gurgel Valente to repay, in exchange for the originals to which I felt I had a right. You said no.

Here, in this letter, I wish to reiterate my proposal – this time directly, excited by the fact that you have written me. The proposal remains the same: I am ready to return the Cr$2000 or Cr$3000, in exchange for the right to use my originals. I need money, and wish to sell the short stories separately, to newspapers or magazines.

To be published by you is an honor. In addition, you are a friend, and a person whom I admire and respect. I must emphasize that I would have preferred for you to have answered my messages (about returning the stories) over the past four years. It is too bad that, coincidentally, you have only written me at the time of sending me the proofs. Your finally writing me has made me, as I have said, hope for a direct contact. However, I am infinitely sorry to see the danger of the coincidence – it may seem that, now that the proofs are in my possession, I am proposing for you to return the short stories. You and I, in addition to those who have kindly offered to transmit my messages, know that I have wanted the originals back for a long time.

You will grant me a favor by accepting my request. The Ministry of Education is obviously not interested in publishing the short stories, otherwise they would not have been kept for four years in a drawer. And in my case – clearly for financial reasons, which are somewhat urgent – I am interested in commercial publication, even without the honor of having a book published by you.

One thing makes me upset: if the book arrived at the proof stage, it means that there was probably some expense incurred on the part of Document Services, an expense that I am unfortunately not able to reimburse.

However, on the other hand, one thing gives me consolation. It is that I have also had losses. Over the past four years, I have received, every now and then, messages sent by you, guaranteeing that the book was “ready for publication,” and “already at the proof stage.” This kept me from selling the short stories separately to newspapers and magazines, for “soon” the short stories, once edited by you, would no longer be unpublished – and I could not sell a short story that at the same time would be published in a book. I turned down proposals of this sort, proposals that were of interest to me. Only once did I decide – faced with the more and more remote possibility of the book’s publication – to assume a commitment. I accepted a proposal from O Estado de S. Paulo. It so happens that they only published one short story. For, after receiving the check, I received an angry letter from the newspaper saying that, if I had given them exclusive publication rights, I would not have given a short story to a Rio newspaper. It so happens that this Rio newspaper did not personally ask me for any short story, did not tell me that they would publish it, and did not explain how they had my short story in hand. My solution was to write a letter of apology to O Estado de S. Paulo – and I lost the contract.

Thus, Simeão, I wish to tell you that, for my peace of mind, I have had losses that are certainly comparable to those of Document Services in preparing proofs. Up to one year ago, these losses did not affect me substantially. But now I have to try to sell the short stories separately.

Please read this letter with consideration. The same that I have had for four years…