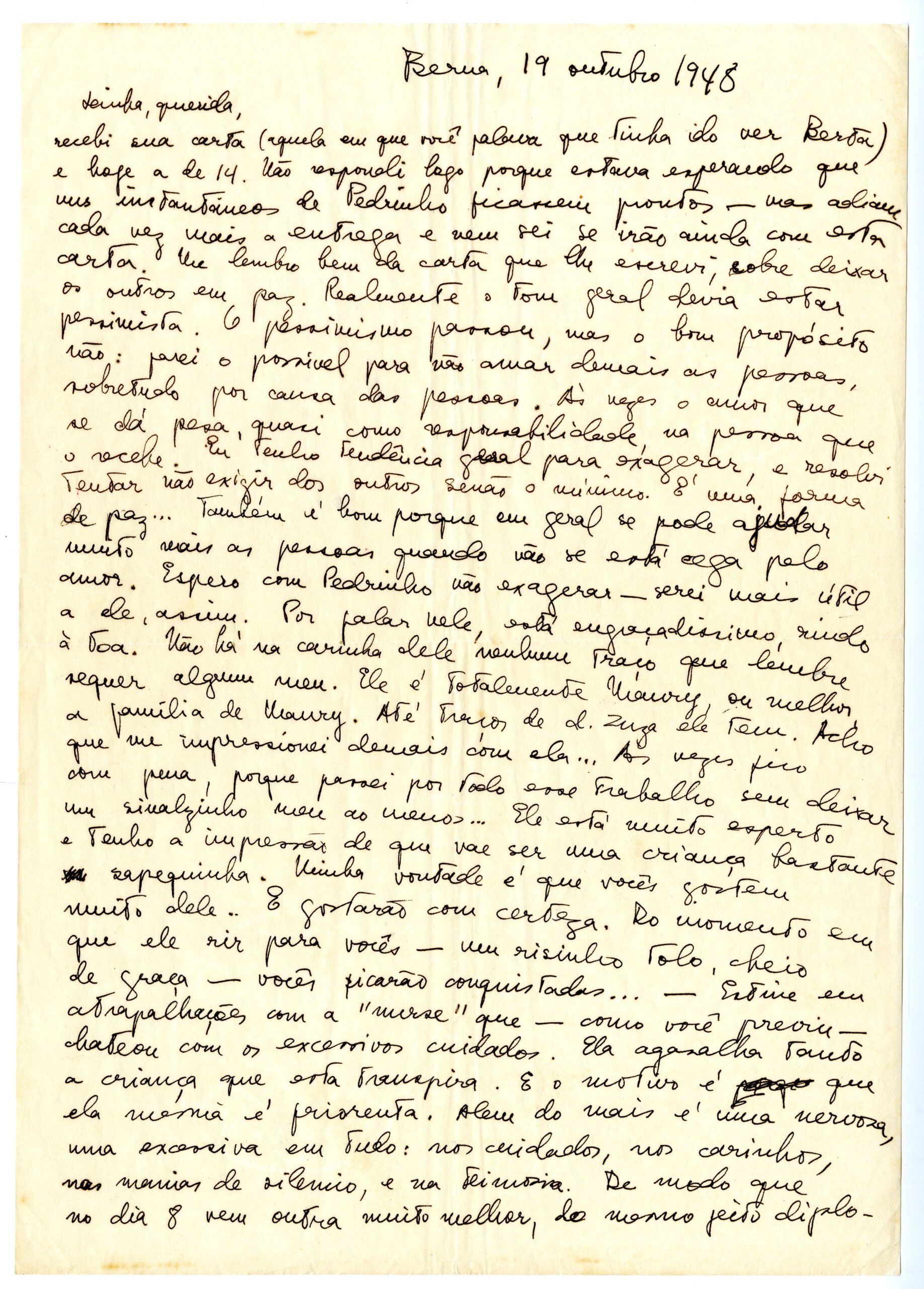 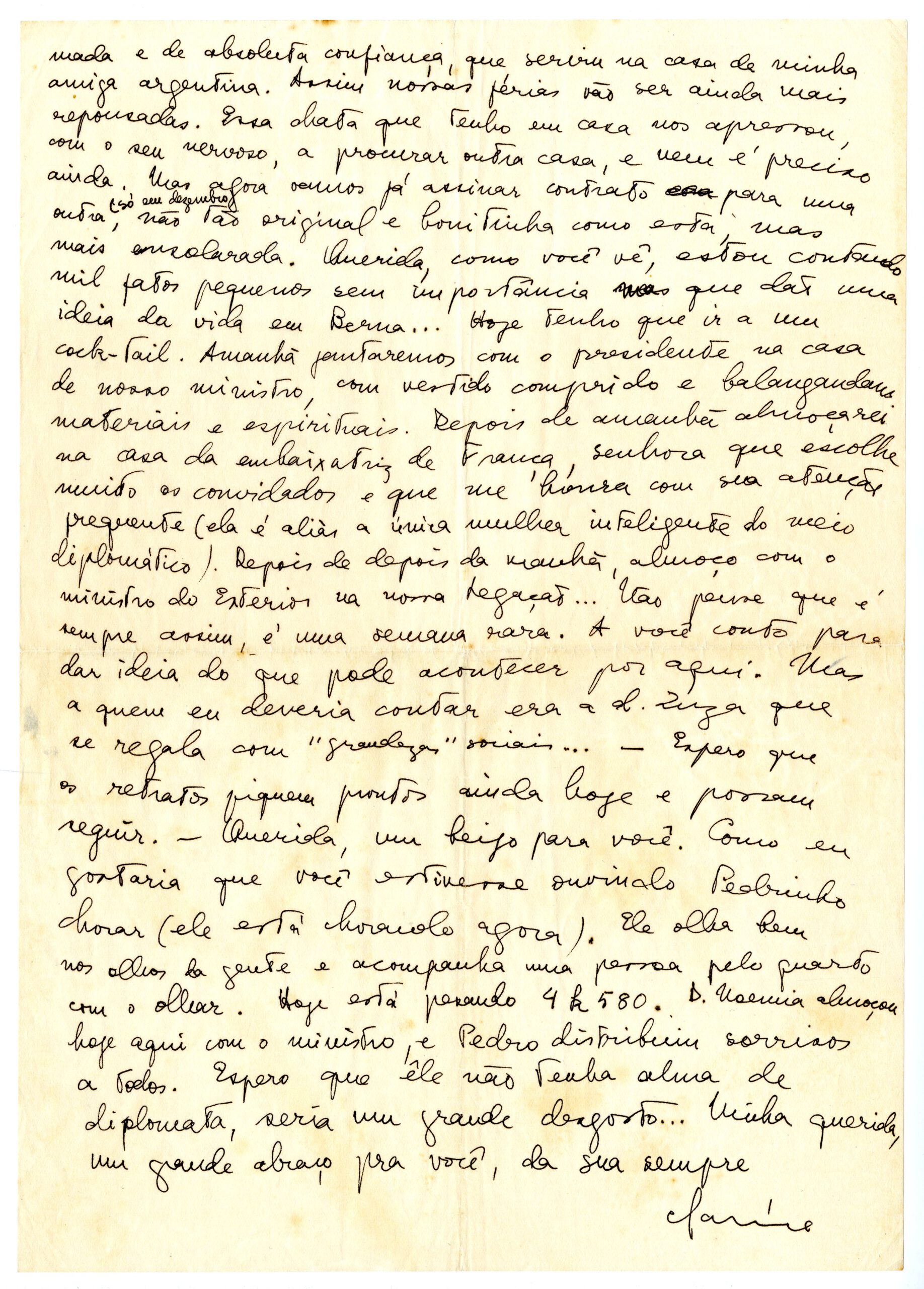 I received your letter (the one in which you said you had gone to see Berta) and today that of the 14th. I didn’t answer right away because I was waiting for some of the snapshots of Pedro to be ready – but putting the delivery off more and more and I don’t even know if they’ll still be sent with this letter. I remember well the letter I wrote to you, about letting others be. The general tone must have been pessimistic, really. The pessimism has passed, but not the good intention: I’ll do my best not to love people too much, especially on their behalf. Sometimes the love you give weighs almost like a responsibility on the person who receives it. I have this general tendency to exaggerate, and I’ve decided to try to ask only the minimum of others. It’s a form of peace… It’s also good because in general you can help people much more when you’re not blinded by love. I hope not to exaggerate with Pedro – I’ll be more useful to him that way. Speaking of him, he’s really funny, laughing at everything. He’s nothing like me at all. He’s much more like Maury, or rather, Maury’s family. He even takes after Zuza. I think I was really impressed by her… Sometimes I feel bad, because I went through all this trouble without leaving not even a slight mark of my own… He’s very clever and I have the impression that he’ll be a very restless child. I hope you all like him.  You certainly will. After he smiles at you – a silly smile, full of joy – you’ll be won over… I had a few mix-ups with the nurse who – as you foresaw – upset me with her excessive care. She puts so many layers on the child that he sweats. And the reason is that she herself is sensitive to cold. Besides, she’s agitated, excessive in everything: in her cares, in her caresses, in her obsession with silence, in her stubbornness. Such that on the 8th a much better one is coming, also certified and absolutely trustworthy, who worked in the house of my Argentinian friend. Thus our vacation will be much more relaxing. This annoying woman, with her agitation, rushed us into looking for another house, and it’s not even necessary yet. But now we’re already going to sign a contract for another one (only in December) that isn’t so original and nice as this one; but it’s more sunlit. Darling, as you can see, I’m telling you thousands of small details that give you an idea of life in Bern… Today I have to go to a cocktail party. Tomorrow we’ll have dinner with the president at the minister’s house, with a long dress and material and spiritual costume jewelry. The day after tomorrow I’ll have lunch at the house of the French ambassador, a lady who is very selective of her guests and who honors me with her frequent attention (she’s actually the only intelligent woman in diplomatic circles). And in two days, I’ll have lunch with the Foreign Minister in our legation…  Don’t think it’s always like this, it’s a special week.  I tell you to give an idea of what can happen around here… – I hope the pictures are ready today and can go. – Darling, kisses for you. How I’d like you to hear Pedro cry (he’s crying now). He looks you right in the eyes and follows you around the room with his gaze. He weighs 4.6 kilos now. Noemia had lunch here today with the minister, and Pedro was smiling at everyone. I hope he doesn’t have the soul of a diplomat, I wouldn’t like it one bit… My dear, hugs for you, from yours always