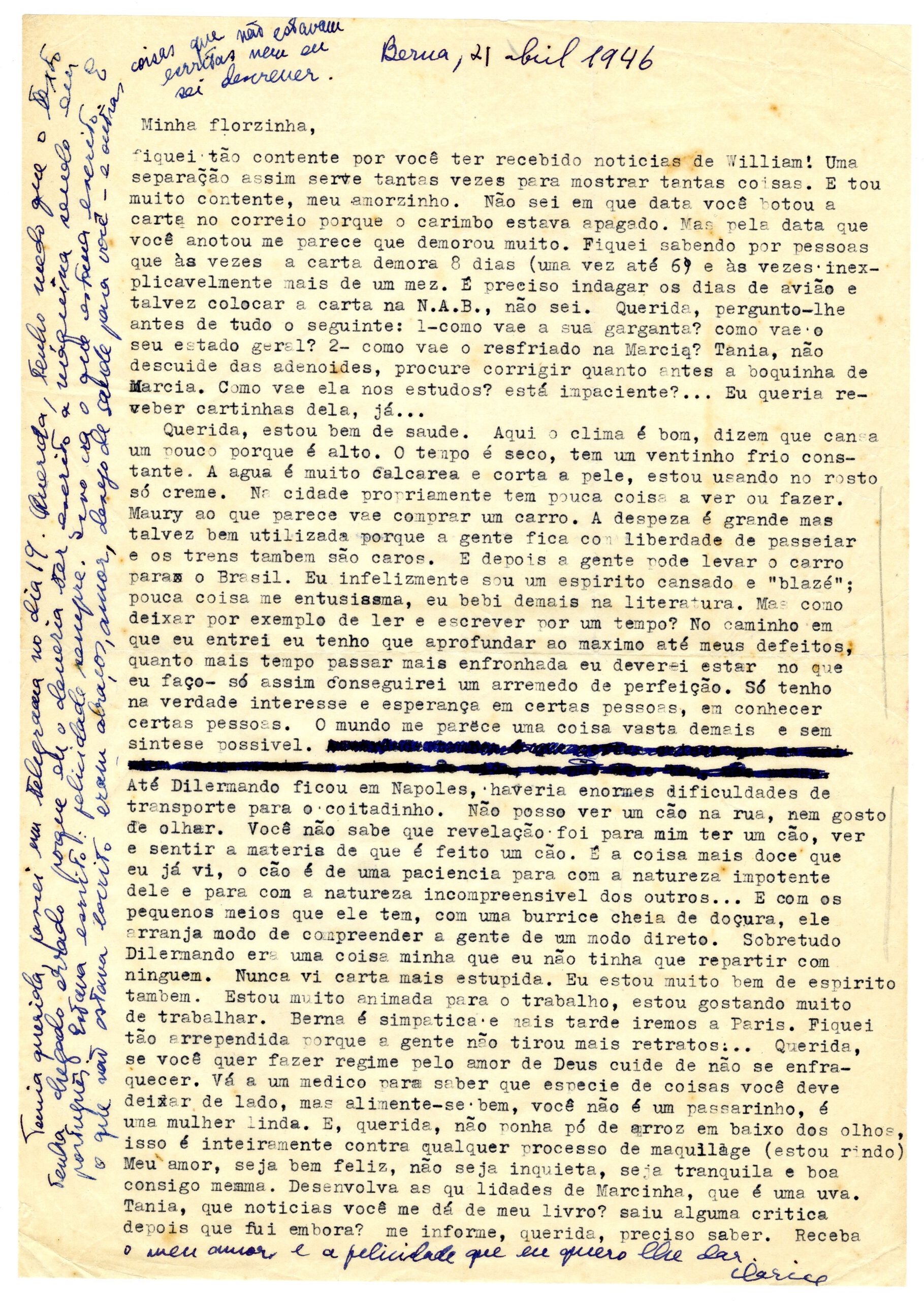 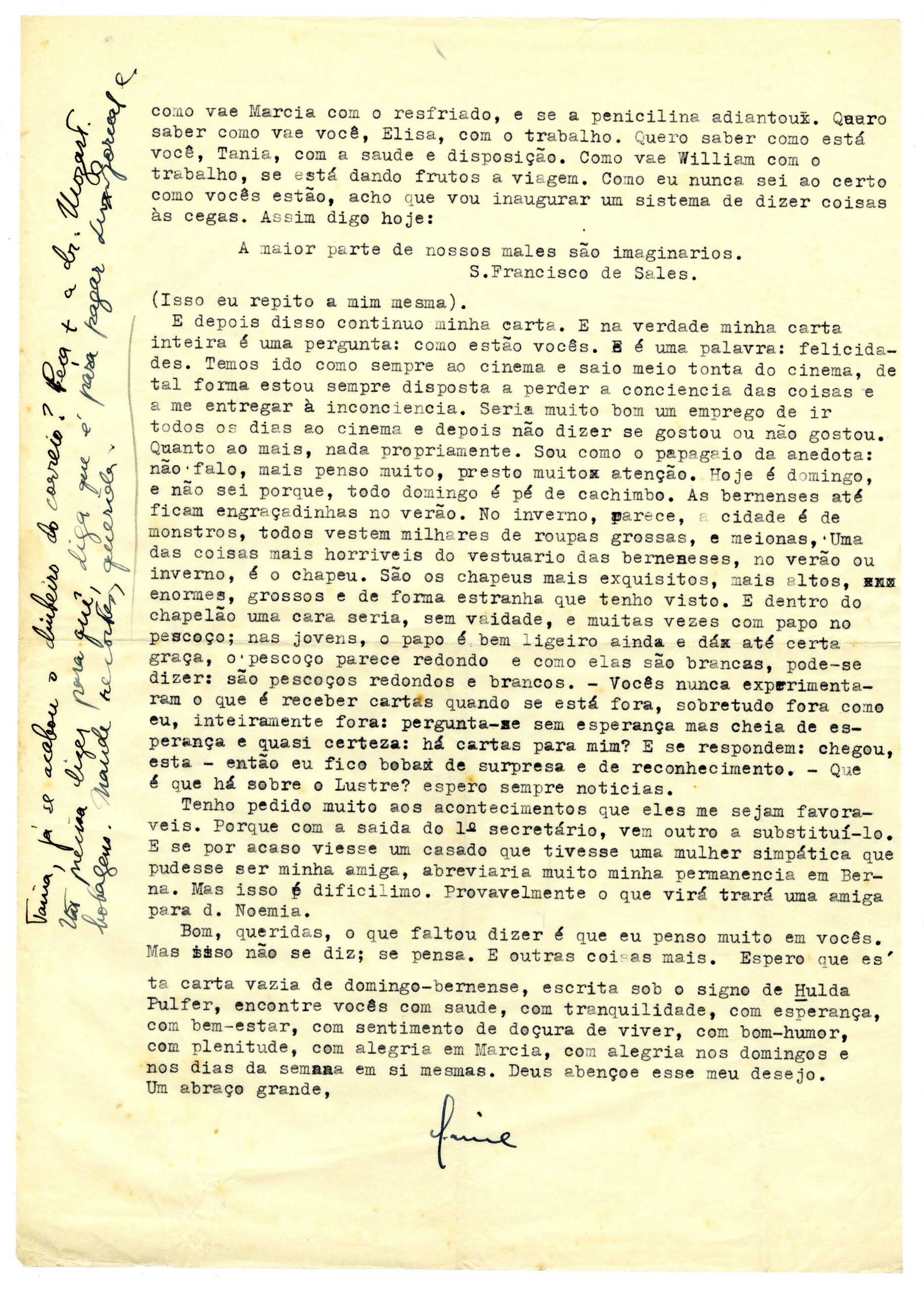 I was so glad you received news from William! A separation like that often serves to show so many things. I’m very glad, my sweetheart. I don’t know what day you put the letter in the mail because the stamp was rubbed out. But from the date you noted, it seems to me that it took a long time. I heard from people that sometimes the letters take 8 days (once up to 6) and sometimes inexplicably more than a month. You need to inquire about the days of the airplane and maybe put the letter on the NAB [Brazilian Navigation Airline], I don’t know. Darling, I ask first of all the following: 1 – How’s your throat? How’s your general condition? 2 – How’s Marcia’s cold? How’s she doing with her studies? Is she impatient?… I’d like to be receiving letters from her…

Darling, I’m in good health. Here the weather is good, they say it’s a bit tiring because it is high. It’s dry, there’s a constant chilly breeze. The water is very calcareous and abrasive to the skin, I’m using only lotion on my face. In the city proper there is little to see or do. Maury is apparently going to buy a car. The expense is great but perhaps well used because we’ll be free to travel around and the trains are also expensive. And afterwards we can take the car to Brazil. I am unfortunately a tired and “blasé” spirit; little excites me, I drank too much from literature. But how to stop, for example, reading and writing for a while? On the path I’ve entered I have to delve as much as possible even into my faults, the more time I spend the braver I should be in what I do- only then will I achieve a mock perfection. I really only have interest and hope in certain people, in getting to know certain people. The world seems to me to be too vast and without a possible synthesis. Even Dilermando stayed in Naples, there would be enormous difficulties in transporting the poor fellow. I can’t see a dog on the street, nor do I like to look. You don’t know what a revelation it was for me to have a dog, to see and feel the stuff that a dog is made of. It’s the sweetest thing I’ve ever seen, the dog is so patient with his helpless nature and with the incomprehensible nature of others… And with the little means he has, with a stupidity full of sweetness, he finds a way to understand us in a direct way. Above all Dilermando was something of mine that I didn’t have to share with anyone. I’ve never seen a more stupid letter. I’m in very good spirits, too. I’m very excited about work, I’m really enjoying working. Bern is nice and later we will go to Paris. I was so sorry because we didn’t take any more pictures. Darling, if you want to go on a diet for the love of God take care not to weaken yourself. Go to a doctor to find out what sorts of things you should leave out, but eat well, you’re not a bird, you’re a beautiful woman. And, darling, don’t put rice powder under the eyes, this is entirely against the rules of makeup (I’m laughing). My love, be very happy, don’t be restless, be calm and good with yourself. Develop Marcinha’s qualities, she’s a delight. Tania, what news do you give me of my book? Have any reviews come out since I left? Inform me, dear, I need to know. Receive my love and the happiness I want to give you.

How Marcia’s doing with the cold, and whether the penicillin worked. I want to know how you’re doing, Elisa, with work. I want to know how you are, Tania, with your health and disposition. How’s William with work, whether the trip is paying off. Since I never know for sure how you guys are, I think I’m going to start a system of saying things out of the blue. So I say today:

Most of our ills are imaginary. St. Francis de Sales.
(This I repeat to myself.)

And after that I will continue my letter. And actually, my whole letter is a question: how you all are. And it’s a word: happiness. We’ve been going to the movies as usual and I leave the cinema a bit dizzy, in such a way that I’m always willing to lose consciousness of things and give myself up to unconsciousness. It would be a great job to go to the movies every day and then not say whether you liked it or not. As for the rest, nothing exactly. I’m like the parrot of the anecdote: I don’t speak, but I think a lot, I pay a lot of attention. Today is Sunday, and I don’t know why, every Sunday is for pipe smoking. The people of Bern even become cute in the summer. In the winter, the city is for monsters, it seems, everyone wears thousands of thick clothes, and stockings. One of the most horrible things about Bernese clothing, in summer or winter, is the hats. They are the weirdest, tallest, biggest, thickest and strangely formed hats I’ve ever seen. And inside the big hats are serious faces, without vanity, and many times with a double-chin; on young women, they are still small and give a certain grace, their necks seem round and since they are white, one can say: they are round and white necks- You don’t know how it is to receive letters when you’re away, above all away like me, entirely away: you ask yourself without hope, but full of hope and almost certainty: are there any letters for me?” And if they respond: this arrived – then I become silly with surprise and recognition. – What’s up with The Chandelier? I expect news always.
I’ve been asking a lot for events to be favorable to me. Because with the departure of the first secretary, another one replaces him. And if by chance one comes who is married and has a nice wife who could be my friend, it would greatly abbreviate my stay in Bern. But this is very difficult. Probably whoever comes will bring a friend for Mrs. Noemia.

Well, my dears, the only thing left to say is that I think a lot about you. But this one does not say; one thinks. And one more thing. I hope that this empty letter from a Bernese Sunday, written under the sign of Hulda Pulfer, finds you in health, tranquility, with hope, well-being, with a feeling of the sweetness of living, with good humor, with  fullness, with joy in Marcia, with joy on Sundays and the days of the week in themselves. God bless my wish. A big hug.

Tania darling, I sent a telegram on the 19th. Darling, I’m afraid the text may have arrived wrong because I should have typed it and in Portuguese. It was written: happiness always. This is what was written. And what was not written was hugs, love, good health for you – and other things that were not written nor can I describe.

Tania, has the money for the mail already run out? Ask Dr. Mozart for more. You don’t need to say what for, say it is to pay for Lux-Jornal and unimportant things. Send clippings dear.