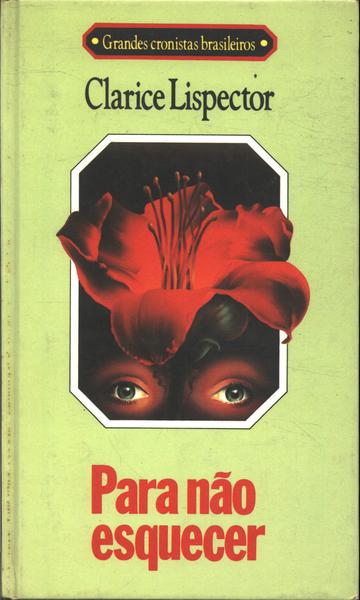 “It’s useless to try to classify me: I simply slip away not leaving, categories pin me down no longer.” This sentence, from the book Água Viva, is provocative in different ways. One senses an author who’s aware of her distinctive place in Brazilian literature and also aware of the danger of categorizations, be it adherence to binary labels (male / female), or  assuming the literary genre in an impervious manner. It is exactly this last aspect, that is, a flexibilization of the literary genre, that is fundamental in order to capture the spirit of the work Not to Forget. One cannot call it a book of crônicas, because it is more than that. The work contains 108 small, medium, and, here and there, extensive texts; there are tales, chronicles, aphorisms, thought-pieces, little jokes – all listed and presented in a seemingly random way, proposing a different approach to the narrated matter.

At least two aspects can be highlighted in the composition of the book. First, the issue of representation. Here, Lispector creates a permanent dialogue with the visual arts and with her own work; it is presented through the figure of the painter, the mirror image, the reference to Paul Klee, the reference to the photographic snapshot and through titles such as “Abstract and Symbolic,” “Writing,” “Pen Drawing of a Little Boy,” “Sketch of a wardrobe,” “Style,” “The woman writer,” and “Some Useless Explanations.” In this last one, she tries to trace the genealogy of the stories of Family Ties as a precarious, incomplete response to a complex process that involves technical choices, memories, and even the discovery, in being read aloud by another person, that her tale is born at the moment it is read. In this lot, you can include the famous text “Brasilia” (“Though the rats adore the city. I wonder what they eat? ah, I know: they eat human flesh.”), in which she confronts Oscar Niemeyer’s architectural project with habitable life, with the (in)human city, challenging an urban model dominated by the automobile and aestheticism. A second aspect, which can generally be called encounters, includes moments of perfect harmony with intimate feelings and with the evocation of beings and places whose presence returns with intensity (“O chá” [Tea]; “Silent Night, Holy Night”). And there is no more to say, because readers can make their own arrangements (by theme, by language) with the possible multiplicities of entries that the book allows.